The Lingering Legacy of American Nazis

George Lincoln Rockwell, leader of the American Nazi Party, shakes his fist during his speech at Drake University in early 1967.
Bettmann / Getty Images
By Lily Rothman

On Aug. 25, 1967 — exactly 50 years ago this Friday — a man was killed whose dismissive TIME death notice began by declaring that he had been “a failure at just about everything he tried.” That man, George Lincoln Rockwell, was newsworthy only as the founder of the anti-Semitic, racist and homophobic group he called the American Nazi Party, later known as the National Socialist White People’s Party, a “risible handful of strutting, beswastikaed… bullyboys,” the magazine said.

Rockwell had been shot at a laundromat by a disgruntled former party official. Given that his followers’ numbers were so low, estimated to be between 20 and a few hundred by TIME back then, that might have been the end of the shameful but isolated episode that was his life.

But, at a time when the scourge of Nazi ideology has returned to American headlines — with far-right demonstrators in Charlottesville, Va., chanting Nazi slogans and carrying Nazi flags at a violent clash earlier this month — it’s clear that the story of Rockwell and his ilk didn’t end when he did, a half-century ago.

Nor was Rockwell the first of his kind. As TIME explained as early as 1938, the influence of Nazi ideas in the U.S. could be traced all the way back to the early 1920s, before Hitler rose to power. “In 1923 the Teutonia Society, patterned vaguely on Klan principles, was the biggest of a dozen or so similar groups whose members gave aid to the National Socialist Party in Germany throughout the late ’20s,” the magazine noted. “In 1933 these groups were merged as ‘Friends of New Germany,’ run by Heinz Spanknobel, a Nazi party member. Herr Spanknobel, indicted by a New York Federal Grand Jury for failing to register as the agent of a foreign nation, speedily fled to Nazi Germany. In 1934 a Congressional Committee investigated the Friends of New Germany, found it ‘for all practical purposes the American section of the Nazi party.’ The Friends changed this name to Amerikadeutscher Volksbund in 1936, resumed functioning under the leadership of a sleek, pompous, garrulous ex-chemist named Fritz Kuhn whose offices in Manhattan are decorated by portraits of Franklin Roosevelt and Adolf Hitler.”

And, as Jon Meacham reminded readers in last week’s issue of the magazine, the isolationist instinct in the lead-up to World War II extended to “outright Nazi sympathy” in some cases. But Rockwell, who founded his group in 1958 — when support of Nazi Germany was no longer a viable issue — played a part in changing what that sympathy looked like.

Frederick J. Simonelli, who wrote a 1999 book on Rockwell, argued that, Rockwell and the group he founded “merit study because Rockwell laid the foundation for what he called the ‘White Power’ movement in the United States.” Simonelli further argued that “virtually all of the diverse organizations within contemporary right-wing, white supremacist U.S. politics” are somehow descended from his American Nazi Party/National Socialist White People’s Party, which was notable for how it focused not on support of a foreign regime but on applying that regime’s ideas to a homegrown concept of American whiteness.

By 1977, ten years after Rockwell’s death, TIME estimated that — in addition to several other neo-Nazi groups operational at the time — there were a total of 400 members in the National Socialist White People’s Party. While it was “politically impotent and dwindling in numbers,” the article noted, “its potential for stirring hatred and creating violence remains high.”

And yet the continuing history of Nazi ideas in American culture is not only a history of how small groups of people loudly trumpeting hate can have a disproportionate impact on the nation. It’s also a history of how the reaction to those people can, in the best cases, move the nation forward in the right direction.

In one potent example from that same year, 1977, another splinter group made headlines in Illinois and nationwide for what happened when they tried to hold a demonstration. A man named Frank Collin, later described by TIME as “a swaggering bullyboy who likes to dress up in a Nazi uniform, spout totalitarian dogma and howl racial slurs,” had been previously involved with the American Nazi Party but had later founded his own group in Chicago, which he called the National Socialist Party of America. Collin had, faced with the high insurance cost of holding a demonstration in Chicago proper, sent letters to a variety of suburbs saying that his group wanted to hold a rally. Though most towns had simply tossed away his request, the village of Skokie, Ill., had decided that its high population of Holocaust survivors meant that a firm negative response was required.

“Simply because they’d gotten a response, the neo-Nazis decided they had a First Amendment case and they went to the ACLU of Illinois,” says Philippa Strum, a Global Fellow at the Woodrow Wilson International Center for Scholars and author of When the Nazis Came to Skokie. “[The ACLU] decided that this was a case of the government of Skokie deciding based on the content of the speech who should be able to speak publicly, so they decided to take the case.”

Ultimately, the Supreme Court decided that the Nazi group could not be stopped from demonstrating in Skokie. That victory for the ACLU cost the group tens of thousands of members, who found the organization’s support of this particular speech a bridge too far, and there never was an Nazi march in Skokie — the small rally in question ended up being moved to Chicago, in part due to the promise of counterprotests in the suburb. (Skokie became the home of the Illinois Holocaust Museum and Education Center; Frank Collin later went to prison for sexually abusing minors.)

But Strum says the ramifications of the case are still felt.

“Once the case was handed down there was a really firm statement that groups, no matter how heinous their thinking, had a right to demonstrate,” Strum tells TIME. “You can certainly see a direct line from the decision in Skokie to the way we look at the First Amendment today.”

The idea that the government shouldn’t be able to determine who speaks in the public arena based on the content of that speech is, she says, “so much taken for granted today that I think you can say it’s a basic part of the American ethos,” though it can still be difficult to agree with in practice when that speech is antithetical to American values.

These days, the matter is not limited to government decisions, as corporations such as Facebook and Twitter confront the question as it relates to the public speech made through their platforms. “What we’re going to do about those private corporations, honestly I don’t know,” Strum says. “Many people who are working in the area of the First Amendment are trying to wrestle with that right now.”

Even so, and perhaps even more importantly, she tells TIME that Skokie remains an example of what a proper American response to such speech — no matter the platform — can look like. The reaction of the citizens of Skokie is, she says, “what should happen.” It’s that same instinct, she says, that was on display last weekend in Boston when thousands rallied against racism.

Though the Constitution prevents the government from stopping speech based on its content, that right and its fellows come with what she sees as a responsibility for citizens to stay involved. The village of Skokie couldn’t keep the Nazis out using ordinances and injunctions, but its citizens could — and did — speak up to say that they would not allow those Nazi ideas to go unchallenged.

“What happened was that average citizens were inspired to come out and take part in the democratic process in a really important way, which is to say ‘I’m going to say what I think of kinds of speech, and I’m going to show that I’m in effect, with my body, speaking on the other side,’” she says. “I think that’s the way democracy ought to work.” 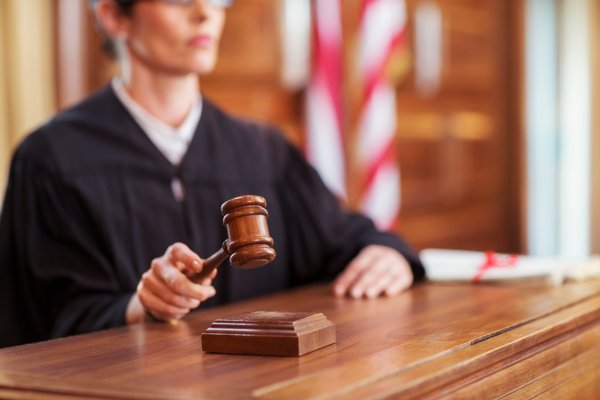 The Democrats' Logic Is Upside-Down on Judicial Confirmations
Next Up: Editor's Pick