It was a total eclipse of the cruise for passengers aboard Royal Caribbean’s Oasis of the Seas. They were treated to a doubly fantastical eclipse experience on Monday afternoon as the ship sailed through the path of totality and Bonnie Tyler, the iconic 80s singer of “Total Eclipse of the Heart,” performed her hit alongside DNCE, the rock-pop band helmed by Joe Jonas.

The ship, which houses over 4,000 passengers, was sold out for the week-long Caribbean excursion, marketed as the Total Eclipse Cruise. But it wasn’t until last week, when TIME broke the news, that ticket holders discovered Tyler herself would be the “special guest” performing during the astronomically important moment.

“Fabulous for me to work with this young, gorgeous band, and they did a fabulous version of ‘Total Eclipse of the Heart.’ It was really awesome,” Tyler said after the high-energy onboard performance, during which they cut the song down to match the length of the solar eclipse — and Tyler led the passengers in a singalong. “With the eclipse happening, performing this iconic song with a legend, our new friend, Bonnie, it was a dream come true,” Jonas added. “The only one way to sum it up is: ‘Turn around…'”

“Every now and then I get a little bit lonely,” Tyler chimed in.

On Monday, Tyler’s song rose to the number one spot on Apple’s iTunes charts, and streams of the power ballad also saw a nearly three thousand percent increase on Spotify in the U.S. in the hours leading up to the big event in the sky.

Watch them perform it live, above. 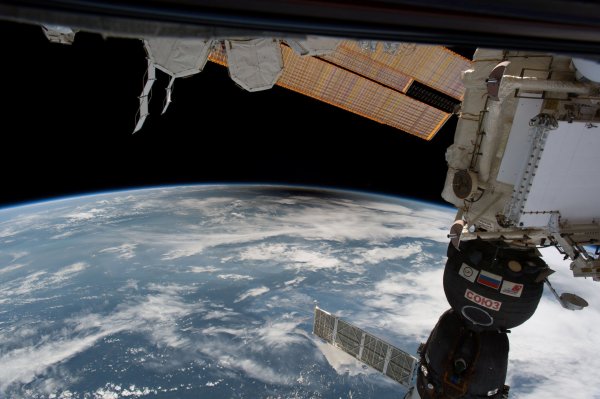 This Is How the Solar Eclipse Looked From Space
Next Up: Editor's Pick