Despite Trump's Protests, Mitch McConnell Says Most News 'Is Not Fake'

Senate Majority Leader Mitch McConnell on Monday addressed the notion of “fake news” — a phrase often appropriated and used incorrectly by President Donald Trump — distancing himself from Trump’s frequent use of the term.

“My view is that most news is not fake, but I do try to look at a variety of sources” McConnell said during a joint appearance with Treasury Secretary Steve Mnuchin.

Trump often dismisses wide swaths of the mainstream media as “fake news,” when the term in fact refers to fabricated news stories.

McConnell and Mnuchin appeared at a Chamber of Commerce event in Louisville, Kentucky, to discuss tax reform and other Republican priorities. It came after Trump thanked Liberty University President Jerry Falwell Jr. for statements he made during an appearance Monday on Fox and Friends. Falwell said Trump “does not have a racist bone in his body.”

McConnell and other Republicans have been critical of Trump’s response to a white nationalist march earlier this month, which left one woman dead and more than a dozen other people wounded. 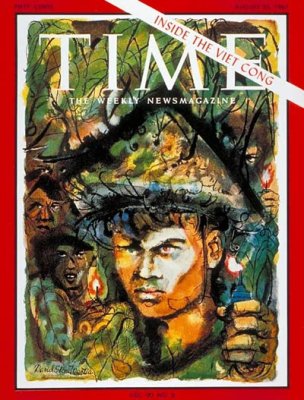 50 Years Ago This Week: Identifying the Enemy in Vietnam
Next Up: Editor's Pick