Game of Thrones fans hadn’t seen or heard from Benjen Stark since he left Bran and Meera at a weirwood tree in the season six finale. But in Sunday’s episode, that all changed.

After Jon Snow managed to fight off the wights who pulled him underwater and emerge from the frozen lake beyond the Wall, his survival chances seemed pretty low. However, just as the army of the dead began to charge, Uncle Benjen rode in with his flaming mace to save the day.

Benjen quickly helped the injured Jon mount his horse and sent him off in the direction of Eastwatch. As Jon rode away, he sacrificed himself to the wights to allow his nephew escape, fulfilling his promise to fight for the living for as long as he could.

“The thing with Coldhands is that it all has to somehow work in a pretty compressed timeframe because…there just isn’t time,” showrunner David Benioff said of Benjen’s return in the post-episode rundown. “For Coldhands, I think it’s almost a relief in some ways because he’s been trapped in this kind of purgatory state between life and death for quite some time. And like so many of the characters in the show, waiting to find out what his purpose is. You know, why is he still alive when he should be dead? And for him, it seems like he’s found his purpose in these last two seasons by saving first Bran and and now Jon.” 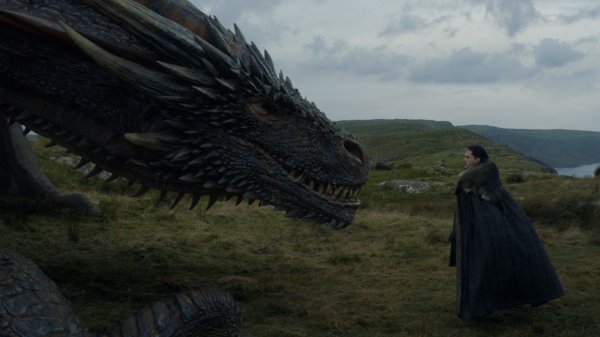 Jon Snow Pretending to Be a Dragon Is the Game of Thrones Outtake You Deserve
Next Up: Editor's Pick