A California man on his honeymoon in Barcelona, Spain was among the victims of the terror attack in the city on Thursday that left 14 dead and many others injured.

Jared Tucker, 43, died in the attack after traveling to Europe with his wife for a delayed honeymoon after they got married last year, his father confirmed in an interview with ABC affiliate KGO. Tucker’s wife Heidi Nunes confirmed his death to People.

The attacks in Spain included a rampage down Barcelona’s Las Ramblas boulevard and another vehicle attack hours later in the town of Cambrils, in which a total of 14 people died.

Tucker’s father, Dan Tucker, said the couple had been in Paris before traveling to Spain to visit a friend. Nunes told KGO she was separated from Tucker during the attack in Barcelona’s Las Ramblas district on Thursday evening. They had been out having drinks, and had just finished when Tucker went to find a restroom. Nunes said less than a minute later, everything was chaos.

“There was screaming and yelling and sirens and crying and everybody was running,” she said. “I got shoved into the souvenir kiosk and was able to kind of duck into there with a small group of people.”

Eventually, Nunes was directed out of the area by police. According to KGO, Nunes tentatively identified Tucker’s remains on Friday. Secretary of State Rex Tillerson confirmed an American had died in the attacks, though he did not immediately reveal the victim’s identity on Friday. 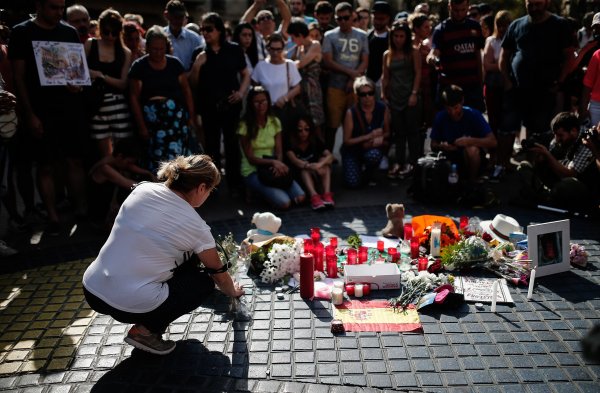 These Are the Victims of the Spanish Terrorist Attacks
Next Up: Editor's Pick