A Total Solar Eclipse Makes History as It Sweeps Across America

Millions of Americans turned their eyes skyward Monday as a total solar eclipse sailed across the country from coast to coast for the first time, turning day into night in more than a dozen states.

It was the first total solar eclipse seen in no other country but the U.S. since the nation’s birth in 1776. Dubbed “The Great American Eclipse,” it was also the first one visible from the contiguous U.S. since 1979.

“We’re all part of something celestial — so much bigger than us, so mysterious,” Ed Sullivan told the Associated Press from Glendo Reservoir in Wyoming, where he watched the historic eclipse. “There is so much to ponder. I don’t even know what questions to ask, but I enjoy just feeling the mystery.”

The rare phenomenon made landfall in Lincoln Beach, Ore. at 10:16 p.m. PST and swiftly crossed the country in about 90 minutes, ending in South Carolina at 2:44 p.m. EDT. “It was downright eerie and amazing. I felt kind of [an] excitement, an ecstatic reverence,” Dan Currin, an eclipse watcher from Portland, told the Oregonian.

More than 1,000 state camping sites and hotels in Oregon had been sold out for months in anticipation of the once-in-a-lifetime event, much like in other parts of the country. Hundreds of people on Monday were gathered at Saluki Stadium in Carbondale, Ill., where temperatures reached a high of 92 degrees Fahrenheit in the afternoon. Those waiting to see the sky show sprawled out on the grass, under shade, as they poured water over their heads to stay cool. When totality hit, crowds erupted in cheers and screams.

“I cried and I didn’t know I was crying,” said Marsha Nowak, a 68-year-old retired school psychologist in Illinois. “It was absolutely magnificent. It was very emotional. I was awestruck by the magnitude of actually what was going on.”

Another eclipse watcher, 58-year-old Tom Anton, also told TIME he was overwhelmed by the event. “I’m at a loss for words,” said Anton, who traveled to the stadium from his home in Glen Ellyn, Ill. “It was pretty stunning.”

“There’s just no words to describe the glory of nature,” added 67-year-old Pat Pazdro of Chicago. “You feel so tiny. It was a very emotional and uplifting feeling. “

In Stanley, Idaho, the eclipse drummed up big business for the small town of only 62 people. Police and business owners said they were expecting an influx of tens of thousands of tourists into the remote resort town, perched on the Salmon River in the path of totality. In the seconds before the totality, stars popped out, darkness swept across the landscape and the temperature plummeted. Frogs started to croak as people whooped and hollered.

The eclipse — traveling at roughly 2,400 mph — passed through parts of 14 states in less than two hours, beginning on the West Coast in Oregon and ending on the East Coast in South Carolina. Most skygazers in Oregon, Idaho, Wyoming, Nebraska, Missouri, Kentucky, Tennessee, Georgia, North Carolina and South Carolina had front-row seats to the total eclipse. Here’s a map of the total solar eclipse’s path:

Solar eclipses happen when the moon passes directly between the sun and the Earth and completely covers the entire face of the sun. All of North America saw the moon partially block the sun, resulting in some darkness, but only the states within the 70-mile-wide path of totality witnessed the total eclipse.

There’s no saying when there will be another America-only eclipse. But those who missed out on Monday’s event can travel to parts of Argentina and Chile in July 2019, when the next total solar eclipse can be seen. A total solar eclipse won’t be seen in the U.S. again until 2024, when one comes up from Mexico and touches states from Texas up to New England. 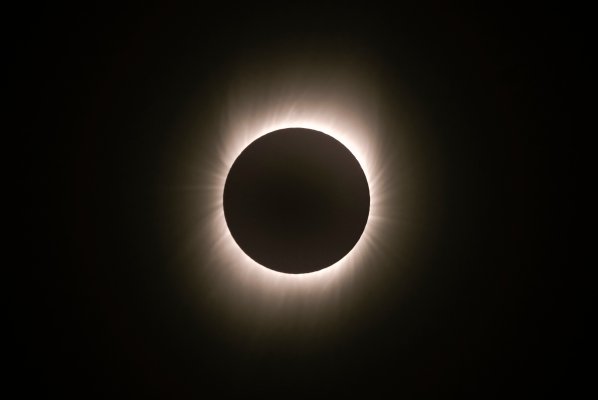 Watch Live: The Total Solar Eclipse in 360 Degrees
Next Up: Editor's Pick