Heather Heyer's Dad Speaks Out: 'I'll Never Get To See Her Smile Again'

Mark Heyer, the father of Heather Heyer, speaks during a memorial service for his daughter at the Paramount Theater on August 16, 2017 in Charlottesville, Va. Heyer was killed Saturday, when a car rammed into a crowd of people protesting a white nationalist rally. (Photo by Andrew Shurtleff-Pool/Getty Images)
Photo by Andrew Shurtleff—Pool/Getty Images
By Lisa Marie Segarra

In the wake of Heather Heyer’s death while protesting a white supremacist rally in Charlottesville, Va., her father Mark Heyer praised his daughter’s impact and opposition to hate.

“The best thing I have to hold on to is that hopefully Heather will have a positive legacy to go on from this,” Mark Heyer said.

Heather Heyer was killed after a car driven by an alleged white supremacist rammed into counter-protesters at the rally. James Alex Fields, Jr., the driver accused of hitting and killing Heather Heyer and injuring 19 others, was taken into custody and is facing charges including second-degree murder.

Her father noted that his daughter was always focused on fighting back against hate and standing up for what she believed in.

“My daughter had more courage than I got. She’s got a wider background that I do. That girl had some courage, and it’s just who she was. She was always that way. I’m proud of what she tried to accomplish. She woke up the town of Charlottesville in a big way.”

Mourners dressed in purple — Heather’s favorite color — expressed their love and respect for her during a memorial Wednesday. Mark said he was thankful to see the people who attended and “took notice” of Heather’s work.

Mark couldn’t believe the hate that led to his daughter’s killing. “You’ve only got so much life, you really want to spend it hating somebody?” he said.

“All of us are so close to each other, and we don’t even realize it. We’re all stupid. We’re all human. We all screw up.”

Mark Heyer said it’s “God’s grace and the prayers of my friends and church members” that have held him up at this time and said that he went to church the Sunday morning after Heather Heyer was killed.

“Heather was my own little girl, and I’ll never get to see her smile again except in pictures. She’s still a young woman. She’s only 32.” 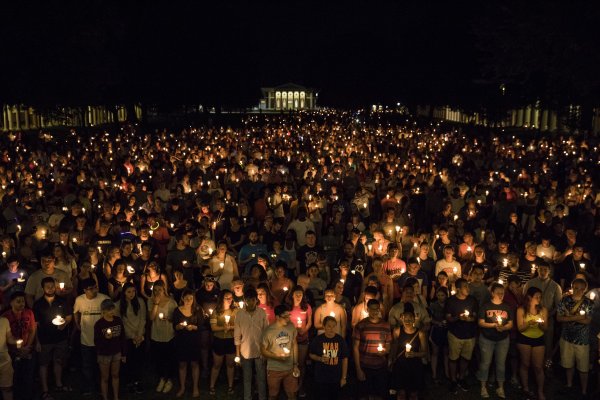 Hundreds Join Candlelight Vigil at the University of Virginia
Next Up: Editor's Pick