Leave it to Lin-Manuel Miranda of Hamilton and In the Heights fame to bring back the Age of Aquarius in the latest installment of Crosswalk the Musical with James Corden. The two harkened back to the groovy sixties, alongside their committed cohort of actors, for a reenactment of the famous 1960’s rock musical Hair. Included in the action: flowing wigs, beaded headbands and — yes — nudity.

“Hair tells the story of — it’s — it’s the sixties,” Corden tries to explain. “It’s in the sixties, and it’s hippie culture, and there’s a war. I think there’s a war, or there’s been a war? … It’s wigs and nudity. It’s a lot of wigs and a lot of nudity.”

Miranda, however, is clearly excited for the drama to unfold on the streets. “In a lot of ways, I feel like everything I’ve ever done has been leading up to this point,” he deadpans in the intro. “In the seven years I was writing Hamilton, all I could think was, ‘If this is big enough, I might get on the crosswalk,'” Miranda joked.

Watch the two perform “Age of Aquarius,” “Let the Sunshine In” and more in the midst of mildly confused and annoyed L.A. drivers, above. Prepare for tie-dye backdrops, bellbottoms galore, and some serious Corden-Miranda bromance. 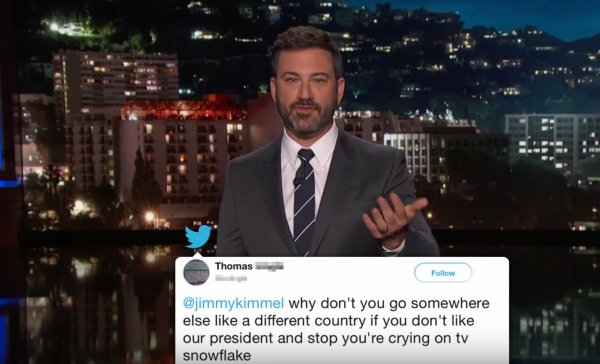 Jimmy Kimmel Tried to Reach Out to Trump Supporters. Watch Him Read the Meanest Tweets He Got in Response.
Next Up: Editor's Pick