Neo Nazis, Alt-Right, and White Supremacists encircle counter protestors at the base of a statue of Thomas Jefferson after marching through the University of Virginia campus with torches in Charlottesville, Va. on August 11, 2017.
Shay Horse—Sipa USA/AP
Ideas
By Doug Stafford
Stafford is chief strategist to Senator Rand Paul and has lived in Virginia for 25 years.

There have been many who have attempted to apply the old saying “Those who do not remember the past are doomed to repeat it” to Confederate flags, statues and other remembrances.

Now, I don’t think that’s actually why many people want the monuments to remain. Yet even if I take them at their word, they don’t seem to want to know or acknowledge the history that stands behind these symbols. They also don’t want to admit that once the guys with the hoods and crosses start marching around, well, it’s not really about statues anymore. It can’t be about statues anymore; if they cared about history, they’d know that.

I do not believe most people are racist. But too many dismiss that racism still exists and ignore that its ugly head has been raised here too often. Charlottesville is but a recent reminder.

Virginia was the home of the Confederacy and its leading general, Robert E. Lee. Interestingly, as PBS noted recently, Lee opposed the building of monuments to his brethren. “I think it wiser,” the retired military leader wrote about a proposed Gettysburg memorial in 1869, “… not to keep open the sores of war but to follow the examples of those nations who endeavored to obliterate the marks of civil strife, to commit to oblivion the feelings engendered.”

Considering how Virginia spent the next 150 years dealing with racism, it might have been better to follow his wisdom.

Virginia was home to one of the most vile laws on miscegenation, passed in the 1920s and targeted specifically at whites and blacks marrying, but on the books until the 1967 Loving v. Virginia Supreme Court case. Think about that for a moment, those of you who pretend we live in a post-racial time or even feel whites alone are under threat: much of the state of Virginia can remember when interracial marriage was prohibited.

And some, just a bit older, can remember bitter battles over the desegregation of public schools. After Brown v. Board of Education in 1954, Virginia Governor Harry Byrd immediately called for “Massive Resistance,” and Virginia, claiming the mantle of states’ rights that others have used to make their racism, declared they would not desegregate. The laws were intended, in Byrd’s words, “to prevent even a single Negro child from attending public schools.”

Some of these public schools in Virginia remained closed for five years, and when they reopened, they were nearly all black students. The white students had relocated to private schools with “segregation grants” to pay tuition.

In 1968, the Courts again ruled Virginia had not desegregated, and more plans including busing were instituted. Also in this year, for the first time, all Virginia public colleges admitted black students.

Why is this all important? Because racism is part of our history, whether we like it or not. Pretending it did not happen, does not happen and can be ignored leads to things like pretending a group of neo-Nazis and a group of counter-protestors are morally equivalent. They are not.

Was there violence in Charlottesville from the counter-protestors last weekend? Yes. As there was from the white nationalists. But whatever the counter-protestors did pales in comparison to the violence done to the fabric of our society by watching men in hoods carrying Nazi flags and torches, spewing vile racist slogans and bigotry — by reminding Virginians and Americans of color of the history of violence against them.

There are good people who question the removal of monuments. It doesn’t make you a racist to discuss historical significance.

It does make you one if you show up with the KKK to march about it, though. It makes you one if, like Republican candidate for the U.S. Senate Corey Stewart, you base your entire campaign on racist dog whistles regarding these monuments.

As you seek to resolve the question, think of the history. Maybe we owe those Virginians and Americans who this country has so badly discriminated against to leave this chapter in our history to books and museums, not town center monuments.

I’m white and live in a wealthy suburb of Washington, D.C. My daughter, who is five years old, is black. Last month, some coward in a truck driving quickly by us not far from our home screamed “nigger” at her. So please, try to tell me racism is dead, or at least that you’d like to keep your monuments standing and your torches lit. Please, tell us more about the moral equivalence between the racists and the people enraged by them. You can’t, because racism isn’t dead. We cannot pretend it is. Instead, we have to acknowledge it, then join together to eradicate it once and for all. 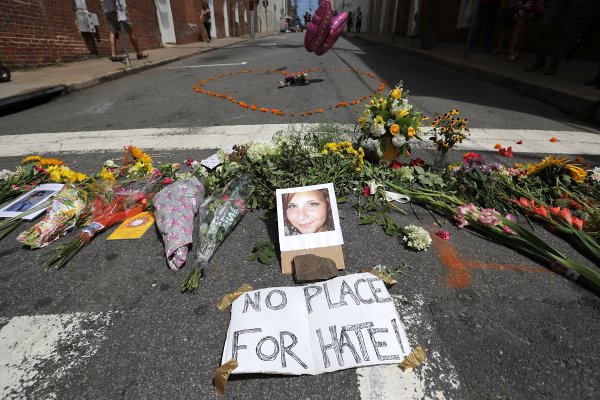 6 Ways for White Allies to Stand Against Hate
Next Up: Editor's Pick