The penultimate episode of Game of Thrones‘ seventh season saw Daenerys Targaryen fly north with her three dragons to save Jon Snow and company from certain death at the hands of the wights. However, the rescue mission took a horrifying turn when the Night King launched an ice spear into Viserion’s heart, killing him.

Daenerys watched in shock as Viserion’s lifeless body sank into the icy water before spurring Drogon and Rhaegal away from the site of their brother’s death. But the nightmare wasn’t over yet. Following Dany and Jon’s emotional heart-to-heart on the boat, the scene cut to the army of the dead dragging Viserion out from the depths of the frozen lake. The Night King then laid his hand on the dragon’s snout, reanimating him in the episode’s closing moments.

Judging by Viserion’s icy blue eye, he has been transformed into some version of an ice dragon. In George R.R. Martin’s A Song of Ice and Fire series, these legendary creatures breathe cold rather than fire. In the books, Jon recalls hearing stories about ice dragons as a child: “The wind was gusting, cold as the breath of the ice dragon in the tales Old Nan had told when Jon was a boy.”

The following description of ice dragons also appears in the ASOIAF companion book The World of Ice & Fire: “These colossal beasts, many times larger than the dragons of Valyria, are said to be made of living ice, with eyes of pale blue crystal and vast translucent wings through which the moon and stars can be glimpsed as they wheel across the sky. Whereas common dragons (if any dragon can truly be said to be common) breathe flame, ice dragons supposedly breathe cold, a chill so terrible that it can freeze a man solid in half a heartbeat.”

However, it’s important to note that the ice dragons of ASOIAF lore are not undead. They are merely the opposite of regular dragons. Viserion, on the other hand, seems to have been turned into a wight dragon — similar to the wight polar bear that also appeared in the episode.

Viserion’s fate doesn’t bode well for the people of Westeros, as the living were clearly having enough trouble fending off the Night King before he had an ice-breathing dragon on his side. It also makes it much more dangerous for Daenerys to bring her remaining two dragons anywhere near a battle with the White Walkers, further diminishing everyone’s chance of survival.

Luckily, Dany isn’t one to easily accept defeat — or let the murder of one of her children go unavenged. “We are going to destroy the Night King and his army,” she told Jon. “And we’ll do it together, you have my word.” 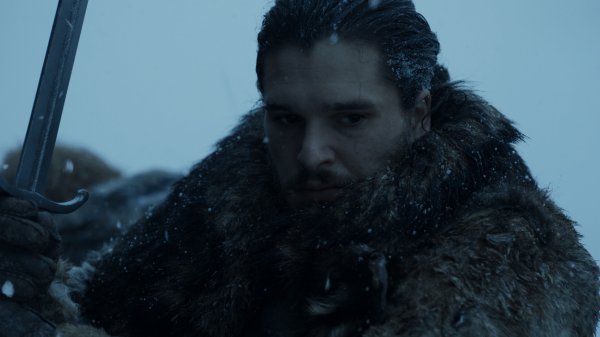 This Surprising Character Just Made a Game-Changing Return on Game of Thrones
Next Up: Editor's Pick