How to Stop the Next Fort Hood Attack

Kathy Platoni holds up her cap with the names of colleagues killed at Fort Hood in 2009 written inside.
Al Behrman—AP
By Mark Thompson

Fort Hood tore down nondescript Building 42003 a couple of months ago. But razing the building didn’t remove the horrors of that November 2009 day when Army Major Nidal Hasan murdered 13 people inside it. Now Specialist Ivan Lopez’s shooting spree is raising new concerns.

The Army, Platoni says, simply doesn’t have the funds and personnel to do mental health adequately. “If it doesn’t smell right as a mental health professional, you’ve got to look further—but we don’t have the manpower to do it,” Platoni says. “A five-minute interview to fill out a prescription isn’t going to cut it.”

The Army’s top civilian offered additional details about Lopez Thursday. Until he pulled out his Smith & Wesson, he’d had no military record of bad behavior. Like many cases of military suicide, Lopez, who served the last four months of 2011 in Iraq but didn’t see combat, was seeking help. He knew something was wrong. “He was undergoing a variety of treatment and diagnoses for mental health conditions ranging from depression, to anxiety, to some sleep disturbance,” Army Secretary John McHugh said.

Lopez was taking “a number of drugs… including Ambien” to help, and had seen a psychiatrist last month. “We had no indication on the record of that examination that there was any sign of likely violence, either to himself or to others,” McHugh said. “So the plan [going] forward was to just continue to monitor and to treat him as deemed appropriate.”

McHugh added: “We have ordered all possible means of medical and investigatory support, as well as added behavioral health counselors” to Fort Hood.

Could dispatching “added behavioral health counselors” to Fort Hood before the shooting have made a difference?

Experts with years in the military mental-health field say that increased staffing—as well as wholesale changes in how the nation, and the Army, treat mental-health ailments—are needed to stop a third Fort Hood attack.

“We need to focus programs on dangerousness,” says psychiatrist and retired Army brigadier general Stephen Xenakis. “Dangerousness is a community-health issue. Military clinicians should make it routine to ask about guns, drug and alcohol problems, are there mood shifts, and are they explosive? It becomes very apparent when you are sitting with folks who might be dangerous.”

Lopez apparently sent such signals before he exploded. “We have very strong evidence that he had a medical history that indicates an unstable psychiatric or psychological condition,” Lieut. General Mark Milley, the top officer at Fort Hood, said Thursday. “We believe that to be the fundamental underlying causal factor.”

A trained mental-health professional can sense trouble, Platoni says. “You’ve got to develop trust and rapport with the soldiers so they can tell you what’s eating away at their soul,” she says. “People get really agitated, sometimes their eyes are red, they’re tapping their feet, they feel very uncomfortable within their own bodies,” she says, describing potential red flags. “They can’t focus, and have no tolerance for frustration,” Platoni adds. “These things don’t happen in a vacuum—there are always signs when it’s not quite right.”

But the Army only has the funds Congress—representing the U.S. taxpayer—gives it. “They send us to war, and then they don’t want to treat us,” Platoni says. “It’s another ‘no thanks for your service.’”

Retired general Pete Chiarelli was the Army’s second-ranking officer in 2009 when Nidal Hasan struck, and he championed mental health for soldiers as vice chief of staff. He says the Army—and the civilian world—haven’t made much progress in dealing with mental health in recent decades. The nation needs a mental-health Manhattan Project to study the mind and figure out how to fix it when it’s hurt. Instead, Chiarelli argues, it’s relying on antiquated methods that don’t always work.

Pete Chiarelli retired from the Army as its No. 2 officer in 2012.
Army photo

“We have horrible diagnostics, we’ve got 20 questions in DSM-5, the psychiatric manual, based on a numerical score that tells us whether we have post-traumatic stress or not, the drugs that we’re prescribing to these kids are all 30-to-40-year old anti-depressants, they’re all off-label kinds of drugs, genetically, everybody reacts differently to them, and we’re short of health-care providers,” says Chiarelli, who retired in 2012. “So even when we do have some therapies that work, we don’t always have the time to apply them—does it become easier to prescribe something, or put him through 15 to 20 90-minute sessions of cognitive behavioral therapy?”

Too much research funded by the federal government remains locked up by the researchers who did it instead of being widely shared with others who might be able to build on it, Chiarelli says. “I had no idea when I signed the [$50 million suicide-prevention] contract with NIH [the federally-funded National Institutes of Health] that the data they collected wouldn’t be released to all the people who were studying suicide, and only released to those people who were part of the study,” he says. “The Army’s thrown $500 million against PTS [post-traumatic stress] research, and what have they got? They’ve still got DSM-5 and a bunch of anti-depressants—they have no new drugs.” Smarter research would go a long way to helping solve such mental-health woes, Chiarelli says—and not just in the Army.

“Go ahead and complain about this kid who had post-traumatic stress down at Fort Hood, Texas,” he says. “But there are all kinds of other people—as we saw at Newtown—who never served a day in the military who have this problem, and we don’t have what we need to help them. Whether it’s Newtown or the Navy Yard or Fort Hood, you have a gun—but you also had a person who had a severe mental issue,” Chiarelli says. “Now that we have the ability to crunch data and probably find diagnostics, and then treatment, for this stuff, God damn it, why aren’t we doing it?” 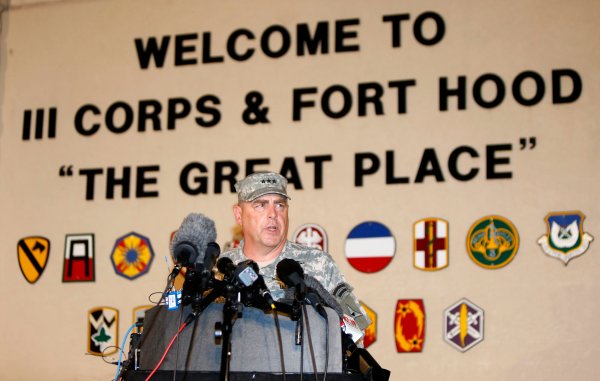 Hunting for Elusive Answers in the Fort Hood Shooting
Next Up: Editor's Pick