How the World Reacted to the Barcelona Terrorist Attack

At least one person has been killed and more than 50 injured in a terrorist attack in the Spanish city of Barcelona, where a van drove into pedestrians in the area of Las Ramblas, a tourist-heavy spot in the city center, late Thursday afternoon.

As tragic details of the incident continue to unfold, notable figures across Spain and the rest of the world have taken to social media to express their sadness to hear of yet another terrorist attack on European soil this year. Here’s what they are saying:

Catalan parliamentary speaker Carme Forcadell said her heart “shrunk” with the news from Barcelona. She urged her followers to stay calm and follow the direction of the Catalonian police force.

Málaga-born actor Antonia Banderas posted a moving message in Spanish, which translates to “merged in one hug with Barcelona.” Also in Spanish, Jennifer Lopez wrote that she was sending “much love and peace to the great city of Barcelona and all its beautiful people.”

Cristiano Ronaldo, who plays for Spanish club Real Madrid, wrote in Portuguese that he was “Dismayed by the news arriving from Barcelona” and gave his “full support and solidarity with the family and friends of the victims.”

And Brazilian soccer player Ronaldinho, who used to play for FC Barcelona, said it was “too sad to see the news coming from Barcelona.” He added: “My support and solidarity for the victims and families.”

Football teams across the world voiced their disgust at the incident and support for Barcelona, including the U.K.’s Manchester City and Liverpool FC.

British Prime Minister Theresa May released a statement Thursday, saying that she was “sickened by the senseless loss of life” in Barcelona. “Following the attacks in Manchester and London, Spain stood alongside the British people. Tonight, Britain stands with Spain against the evil of terrorism,” May said.

President Donald Trump urged Barcelonetas to “be tough and strong.” Republican House Speaker Paul Ryan described the attack as “pure evil,” while Melania Trump tweeted a short message saying, “Thoughts and prayers to #Barcelona.” Other U.S. politicians and celebrity figures sent tweets voicing their prayers and solidarity for the victims, including Oklahoma Sen. Jim Inhofe, and Massachusetts Rep. Joe Kennedy III. In Spanish, Apple CEO Tim Cook wrote: “Tragic and senseless attacks in Barcelona. Our thoughts today are with all our friends and colleagues in that great city.” 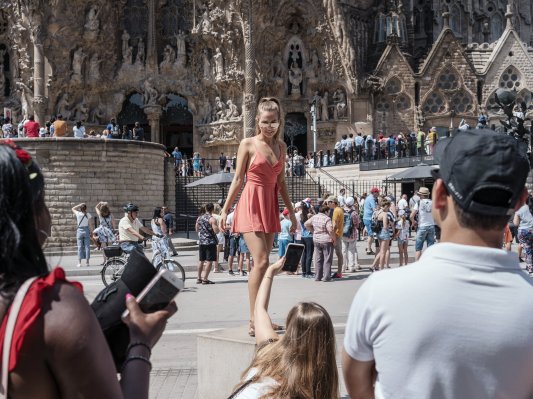 Europe Made Billions from Tourists. Now It’s Turning Them Away
EDIT POST