See Where Confederate Monuments Are Coming Down

A longstanding national debate over Confederate statues, street names and other markers intensified this week following deadly clashes between white supremacist groups and counter-protestors in Charlottesville, Va. One woman was killed during the weekend mayhem, while two police officers died in a helicopter crash related to the incident.

Following the violence, communities across the country made new plans and accelerated existing efforts to remove statues celebrating Confederate leaders, including Robert E. Lee and Jefferson Davis. A handful of monuments have already come down in places like North Carolina and Florida, while others are expected to be removed shortly.

Some view Confederate statues as painful reminders of one of America’s darkest periods, when the nation was engulfed in a bloody civil war and slavery was the law of the land in many states. But others view their removal as an affront to history.

President Trump on Thursday threw his support behind those fighting to keep the monuments in place, saying that it’s “sad to see the history and culture of our great country being ripped apart.”

“The beauty that is being taken out of our cities, towns and parks will be greatly missed and never able to be comparably replaced!” Trump added in a series of tweets.

According to the Southern Poverty Law Center there are more than 1,500 Confederate “place names and other symbols in public spaces, both in the South and across the nation.” Prior to the Charlottesville rallies, several cities had already removed Confederate monuments, including New Orleans, Austin, Orlando, Louisville. and St. Louis. Many other monuments came down in the days after the protest.

Here’s where Confederate monuments have been removed, and where they’re planned to be removed next.

Where have monuments been removed?

A monument dedicated to fallen Confederate soldiers in Gainesville was quietly brought down and taken away on Monday by workers hired by the Daughters of the Confederacy. In St. Petersburg, a marker indicating the Stonewall Jackson Memorial Highway was removed on Monday.

Earlier this year, the city of Orlando moved a Confederate statue from a public park to a cemetery section dedicated to Confederate veterans.

Protesters in Durham brought down a Confederate statue located outside a government building on Monday. Video footage of the removal went viral, and one protester, a 22-year-old woman, now faces felony charges.

A monument memorializing Confederate war veterans was removed Tuesday from Los Angeles’ Hollywood Forever Cemetery, where dozens of Confederate veterans and their families are buried. CNN reports the Long Beach chapter of the United Daughters of the Confederacy requested the cemetery remove the monument. In San Diego, a plaque honoring Confederacy president Jefferson Davis was removed from a public park on Wednesday.

A marker honoring Robert E. Lee was removed from a tree in Brooklyn planted by the Confederate general in the 1840s. A plaque installed by the United Daughters of the Confederacy in 1935 was also taken down, the New York Daily News reported.

Where will future monument removals occur?

The removal of the statue of Lee in Charlottesville that prompted the violent protest was proposed in April. The statue has not yet been removed.

CNN reports that officials in Richmond, Va. are holding public meetings to get community input on removing the many Confederate monuments in the city. They aim to have a plan for removal this fall.

The Lexington city council voted unanimously to go ahead on a proposal to remove two Confederate statues from the lawn of a former courthouse on Tuesday, the Lexington Herald Leader reports. Mayor Jim Gray has 30 days to propose a new location for the statues. The Kentucky Military Heritage Commission will have to grant authority to remove the statues.

The Helena City Commission directed the city manager to take down a Confederate memorial from a city park on Wednesday, the Independent Record reports. The decision came after Native American state lawmakers called on the city of Helena to remove a granite fountain dedicated to Confederate soldiers on Tuesday, following the violence at Charlottesville.

Dallas Mayor Mike Rawlings proposed creating a task force to assess calls to tear down the numerous Confederate statues in the city, D Magazine reports. Rawlings did not support the immediate removal of the monuments, although he said he personally felt the statues are “dangerous totems.” In San Antonio, a proposal to remove a Confederate monument from a downtown park was met with protests on Saturday. Two city council members filed a request in July to relocate the statue of a Confederate soldier, KSAT 12 reports.

Jacksonville City Council president Anna Lopez Brosche called for moving all Confederate monuments from public property to a museum. In a statement, Brosche asked the city’s parks and recreation department and planning department to “conduct an inventory of all Confederate monuments, memorials and markers on public property.” Following the inventory, she plans to propose legislation to move all the artifacts to educational institutions.

Maryland Gov. Larry Hogan on Tuesday called for removing a statue of Supreme Court Chief Justice Roger B. Taney from statehouse grounds in Annapolis. Taney was behind the 1857 Dred Scott decision, which denied that black Americans could be citizens.

“The time has come to make clear the difference between properly acknowledging our past and glorifying the darkest chapters of our history,” Hogan said in a statement obtained by the Baltimore Sun.

Birmingham Mayor William Bell ordered a Confederate monument at a public park to be covered with plastic on Tuesday. On Tuesday night, city workers built a temporary structure around the statue. It is illegal to move Confederate monuments in Alabama, and state attorney general Steve Marshall has filed a lawsuit against Bell, saying obstructing the monument defies the law.

Busts of Lee and Stonewall Jackson will be taken down from the hall of the City University of New York, Gov. Andrew Cuomo tweeted on Wednesday. Cuomo additionally asked the acting secretary of the U.S. Army to remove Confederate names from streets in Brooklyn. 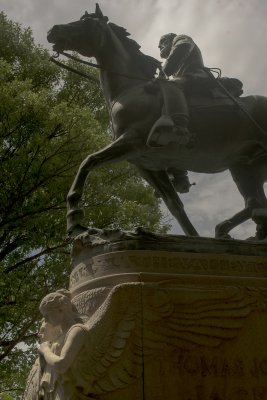 John Grisham: ‘Silence Is Not An Option'
Next Up: Editor's Pick