Stephen Colbert sat down with the Los Angeles Times for a wide-ranging interview that covered everything from Lord of the Rings author J.R.R. Tolkien to French philosopher Léon Bloy and, of course, President Donald Trump.

Trump’s time in office has been a whirlwind, and it turns out it’s hard for late-night comedy writers to keep up with the rapid-fire news cycle. “We add new material between 4:45 and 5:15 almost every night,” said Colbert about the show, which tapes around 5:30 p.m. ET. “We don’t want to wait until tomorrow.”

The endless cycle, though, makes it hard not to get jaded, which Colbert recognized. “Cynicism is an enormous problem,” he said. “I’m actually a hopeful person. But the way to stay hopeful is to acknowledge and to not accept what is absolutely amoral, mentally ill behavior as normal.”

Colbert has found it difficult to avoid getting emotional about Trump’s statements and actions, for instance when the President spoke to the Boy Scout Jamboree. “To get children to boo and hoot,” said Colbert before quoting the Bible. “There’s a moral heresy involved with the President getting children to engage in his own behavior.”

Colbert, though, says he is aware that as the host of The Late Show, he’s not supposed to lecture the audience. “The times you see me being my harshest or scolding, I promise you, that’s not what we wrote. I just get swept up in the emotion of the moment while I’m talking about it,” he said. He can’t always help it, though. For instance, when he uttered a vulgar Putin-Trump joke that faced backlash. “That would be an example of perhaps letting my emotions get the best of me,” he told the Times. Trump responded to the comment by calling Colbert a “no-talent guy,” which he took in stride. 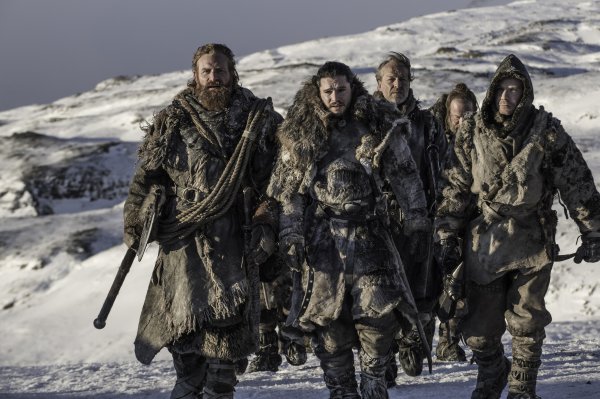 Who Will Die in the Battle Beyond the Wall on Game of Thrones?
Next Up: Editor's Pick