Seth Meyers has never been shy about telling his viewers exactly how he feels about the President, something that was abundantly clear on his Wednesday night episode where he took the President to task for his comments during a press conference about the violent rallies in Charlottesville that faced widespread bipartisan criticism.

Meyers didn’t mince words on his “A Closer Look” segment as he addressed Trump’s assertion that there were “some very fine people on both sides” at the rallies.

“After being pressured into reading a carefully scripted statement denouncing Nazis on Monday, President Trump has spent the rest of the week showing us who he really is — and this is exciting — a lying racist,” Meyers said. “No, there are no fine people marching with Nazis and white supremacists. No one gets accidentally caught up in a white supremacist rally.”

Meyers went on to say he viewed Trump’s desire for approval was especially dangerous, given the support that the white nationalist movement has shown him.

“He defends the white nationalist movement both because he’s racist and because they show up and they chant his name and the show him love,” he said. “And his brain disease makes it impossible for him to denounce anyone who supports him. What Tuesday showed is that Donald Trump will never change. He showed us again who he really is: a lying racist who’s desperate for praise.” 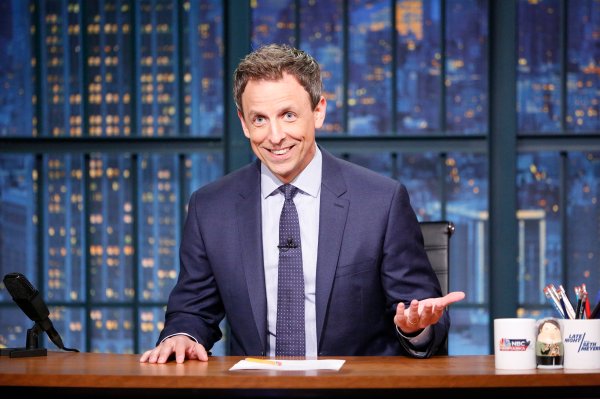 'Our Country Be Damned.' Late-Night Hosts Keep Slamming President Trump Over Charlottesville
Next Up: Editor's Pick