The Texas pastor, author, homemaker and social-media star talks about faith, family and the debates that are causing schisms among Christians.

In your new book, Of Mess and Moxie, you call yourself “low-grade Christian famous.” What does that look like?

It’s maybe a D-minus level, enough to get recognized in airports, but not enough to really have any true advantages. The Christian world is pretty small, especially for women in leadership.

As a woman of faith, do you think there’s a way forward in the anti-abortion vs. pro–abortion rights debate?

It’s one that my particular tribe of women is asking. Historically the Christian community has taken what is a very fraught decision and reduced it down to a sound bite. Right or wrong. But rather than simply just a pro-life stance, I’m seeing a much broader construct, which is pro–prenatal care, pro–affordable housing, pro–health care.

Why did so many evangelical Christians vote for President Trump, who didn’t seem to espouse traditional evangelical values?

The election exposed a divide in the Christian community in terms of what we hold dear and what garners votes. We are now facing an incredible uphill battle to see if we can reclaim any shared territory.

A lot of Christian leaders have been very excited by his actions so far. Are you?

I am incredibly concerned. I am concerned for my friends of color, for my friends who are immigrants. I’m deeply concerned about the language and the tone, that adversarial space is just being normalized. My son [who was adopted from Ethiopia] has peacefully and happily gone to school with his classmates now for almost six years. Shortly after the election he started hearing his first racial slurs in school.

Has your perspective changed now that you’re the parent of children from Africa?

Unquestionably. Going into our adoption, I would have said racism mostly was in the rearview mirror. It has been a crash course in lingering racism and implicit bias and the awful realities of white privilege. I’m probably not even the same human being as I was when I first brought them home.

Do you think LGBTQ issues will eventually divide the church?

I feel hopeful, to be honest. Had you asked this question even 10 years ago, I would have had a different answer. Now I see really smart people pulling chairs up to the table and thinking this through together. If we are following Christ literally, then nobody’s humanity is up for grabs. Nobody. That is a nonnegotiable. So I’m hopeful. And I hope to help lead that charge.

Were you surprised by the vitriol when you first expressed your opinion?

Yes and no. I knew that space was tender. It’s fragile, theologically. But if the end result was that I in some tiny, tiny, tiny way created a little safe space where really good people could join a conversation that matters, then I’m glad for it. It nicely parlays into what my dream is for my little moment on this earth, which is to set a really wide table.

What are the conversations happening in your church community, and your dinner table, about Charlottesville?

Our family and church community watched the brutal display of humanity in Charlottesville. I was horrified. I was humiliated. I was furious. But I was not surprised. Our friends of color have been sounding the alarm for centuries, but we’ve been conditioned to rationalize the circumstances — “This wasn’t about white supremacy; it was about removing history!”; distance ourselves from complicity; and minimize the pain of our neighbors. The truth is obvious to anyone humble enough to admit it: white supremacy is a scourge upon the American landscape, and the only adequate response is confession, repentance and an unwillingness to normalize the language, icons, symbols and inequitable systems that celebrate the White Story over the Real Story. In our family and church we spent the weekend lamenting, and we will continue to spend our days listening to our friends — and children — of color, believing them, and fighting for them.

You’ve called yourself the worst-ever end-of-school mom. After five kids are you better at back to school?

It’s a nightmare. I think it cost me around $3 million a year to get them all back into school. When I was growing up, my mom gave me a notebook and a pencil.

What is your parenting philosophy in one sentence?

Take your time. No pressure. Lighten up — it’s probably going to be O.K. 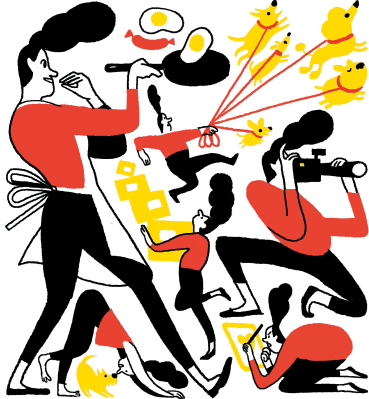 What Do I Do Now? A Midlife Career Change May Be Just the Challenge You Need
Next Up: Editor's Pick