Signs calling for renaming Lee Park to Heyer Park, the site where white supremacists and Nazis gathered last Saturday, lay at the base of the Robert E. Lee statue after Heather Heyer was murdered, in Charlottesville, Virginia, on Aug. 16, 2017.
Samuel Corum—Anadolu Agency/Getty Images
Ideas
By Alex McDaniel
McDaniel is Editorial Director at Oxford Newsmedia in Oxford, Mississippi.

The aftermath of Charlottesville has sparked a national debate about Confederate monuments and their place in society, an argument often hinged upon the question of whether removing them equates to “changing” or “erasing” history. Even President Trump chimed in this week with a red-herring argument regarding whether monuments of George Washington or Thomas Jefferson should be removed along with Confederate statues.

Most of the South’s Confederate monuments were erected at the start of the 20th century, a time when false Lost Cause ideology had taken root as a way to rationalize the Southern fight and defeat. Oxford’s monuments were erected more than 40 years after the war, and it’s no accident they were placed in the city’s most symbolically powerful spots (at the center of campus and the center of town). Monuments were designed, constructed and dedicated with the purpose of eternally memorializing the Confederacy as a nation of heroism anchored to a noble fight for states’ rights — a country that wasn’t “defeated” by the American Union it sought to sever, but merely outmanned and overwhelmed.

Confederate statues don’t tell the story of the Civil War, but rather how people wanted the war to be remembered. It didn’t matter that the glossy narrative of the Confederacy’s fight for liberty stood in stark contrast to the words of its leaders who decades earlier clung to the preservation of slavery and economic prosperity as the primary cause of secession. Monuments served not only to freeze that sentiment but to establish Southern white supremacy as a distinct cultural force destined to rise again.

A century later, that story persists in many ways, creating yet another false narrative that preserving Confederate monuments is crucial to understanding its history. More often than not, those monuments contradict what we know to be true about the war and the Confederacy. This isn’t to say there isn’t value to them in studying the postbellum South. But there’s no convincing argument against finding more suitable places for Confederate monuments to serve that purpose and no reason why a false account of history should remain mounted in reverence at a public park or outside a courthouse or at the entrance of campus at a public university. Even Mississippi law, which prohibits the removal of any war-related monument, statue or landmark on public property, has an exception for moving them to another approved location.

The debate isn’t over. And we’re part of it, whether we want to be or not. Reassessing the placement of Confederate monuments has nothing to do with changing history and everything to do with making sure we’re on the right side of it.

This article originally appeared on The Oxford Eagle. 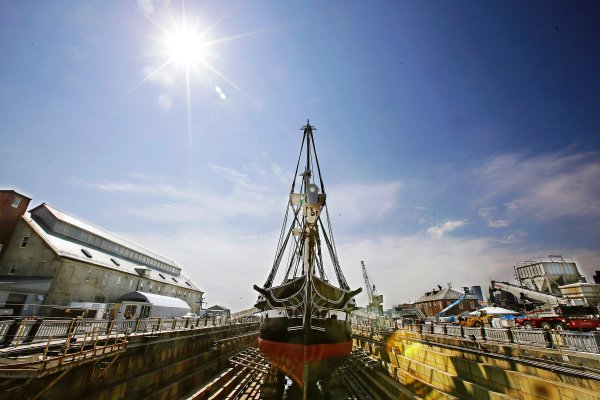 The USS Constitution Is Back in the Water
Next Up: Editor's Pick