A memorial for Heather Heyer, who was killed after a man crashed his car into a group of counter-protestors at a white supremacist rally, will be held at 11 a.m. E.T. Wednesday.

People were also asked to wear purple, Heyer’s favorite color, at the service in a downtown Charlottesville theater. Heyer lived in Charlottesville, where the rally took place, and worked as a legal assistant.

Heyer’s mother, Susan Bro, said that her daughter’s death should serve as “a rallying cry for justice.”

“Somehow I almost feel that this is what she was born to be, is a focal point for change,” Bro said in an interview with the Huffington Post.

The driver who hit Heyer, 20 year-old James Alex Fields Jr., was taken into custody shortly after and faces charges of second-degree murder, among others. In addition to killing Heyer, Fields, who was linked with the hate group The Vanguard, injured 19 others when he rammed a Dodge Challenger into the crowd and then quickly reversed, hitting more people. 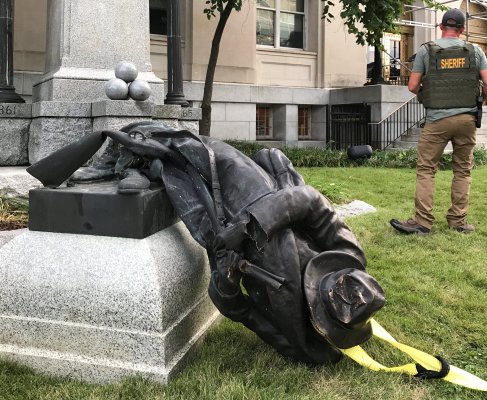 A Confederate Statue Is Gone, But the Fight Remains in Durham
Next Up: Editor's Pick