As it turns out, the possibility of nuclear war was not the worst crisis that Donald Trump faced in the last week. The embattled President of the United States was blasted for defending neo-Nazis, lashing out at the “alt-left,” and doubling down on his statements that “both sides” were to blame for the chaos in Charlottesville, Virginia over the weekend that ended with one woman dead and 19 others injured when a man drove his car into a crowd of counter-protestors. Jimmy Kimmel used his monologue on the Tuesday night edition of ABC’s Jimmy Kimmel Live to address Trump’s outrageous press conference.

“I wouldn’t be lying if I said I would feel more comfortable if Cersei Lannister was running this country,” said Kimmel, noting, “I don’t know who decided it would be a good idea to send him out there to talk to reporters today, but whoever did obviously misread his state of mind and the mood in this country right now. I think I can say this with reasonable certainty, the president is completely unhinged. The wheels are off the wagon and hurtling through space.”

Kimmel reached across the aisle with both hands as he addressed Trump voters. “I want to say I get it. I actually do. You were unhappy with the way things were going. You wanted someone to come in and shake things up. You didn’t want business as usual – nothing ever seems to get done – it’s always the same — these candidates make a lot of promises that go nowhere – it happens over and over again…and you’re sick of it,” he admits. “And then this guy shows up riding down a golden escalator — he’s not a part of the political establishment; in fact, he’s the opposite of that… Let’s roll the dice. Let him get in there and run the country like a business.”

The host then proceeds to list his offenses. “He signs a ban on Muslims that he claims isn’t a ban on Muslims. He compliments the President of the Philippines for murdering drug addicts. Hours after a terror attack in London, he starts a fight with their mayor. After criticizing Obama for playing golf, he plays golf every weekend. He accidentally shares classified intelligence with the Russians. He tweets a typo at midnight, wakes up and claims it was a secret message. He praises Jim Comey in October and calls him a coward in June. He fires him. He lashes out at his own attorney general for recusing him from the investigation. He hires the Mooch – and fires the Mooch. He bans the transgendered from the military without telling anyone in the military he’s doing it. He plays chicken with Kim Jong Un. And that’s just some of the list… If I went through all of it, it would be longer than the menu at the Cheesecake Factory. He is, by every reasonable account — and I’m using his own favorite words here — a ‘total disaster.’… But you’ve been trying to ignore it – because you don’t want to admit that these smug, annoying liberals were right! It’s the last thing you want to do. But the truth is — and deep down inside you know you made a mistake, you know this is true – you made a mistake. You picked the wrong guy.”

It is here that Kimmel makes a bold proposition: removing Trump as President and installing him as the first King of America, a figurehead who’s far away from political power. “England has a Queen,” he explains. “She lives in a palace – everyone makes a big deal when she shows up – she has no power at all. In the morning, they put a crown on her head and she stands there and waves, she goes back to bed. That’s it. If the Queen were to walk out on her balcony and strip off her top, nothing over there would change. The Queen could be completely bonkers – it would make no difference. She’d still be Queen, it’d still be fine. That’s what we need to do with Donald Trump. We need to set him up in castle – maybe in Florida – lead him to the top, and then lock the door to that castle. Everyone can call him ‘Your Highness’ – maybe we give him a scepter – and that’s that. He can sit there watching Fox and Friends, maybe chip a few golf balls out the window of his tower. There’s no way he turns that deal down – and we need to get creative here because enough is enough. Desperate times call for desperate measures. And I’m asking you, the people who supported Donald Trump, to step in and help for the good of this country. Mike Pence is ready, he’s boring. He’s relatively sane. He looks like a friendly neighbor you would borrow a lawn mower from. Let’s get him in there before it’s too late. Let’s make America Great Britain again!”

You have to admit, the slogan is catchy!

Fellow late night hosts Seth Meyers and Stephen Colbert also had unkind words for Trump, which you can read about here and here. 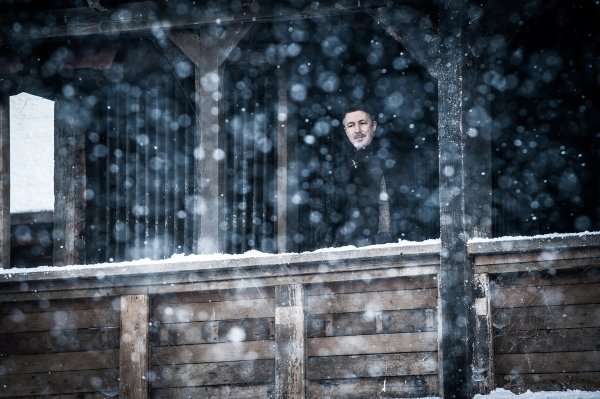 Game of Thrones' Aidan Gillen on Whether Littlefinger Actually Has Feelings for Sansa Stark
Next Up: Editor's Pick