The low-cost Irish airline Ryanair has called on U.K. airports to limit the number of drinks sold per boarding pass and enforce a ban on early-morning alcohol sales, in light of increased drunken and disruptive behavior of passengers traveling from British airports.

The airline, which flies throughout Europe, is urging British airports to “prohibit the sale of alcohol at airports, particularly with early morning flights and when flights are delayed,” Ryanair’s Chief Marketing Officer Kenny Jacobs told TIME in a statement. This would include a total ban on all alcohol being sold before 10 a.m. and limiting the number of drinks purchased in bars and restaurants to a maximum of two.

“Given that all our flights are short-haul, very little alcohol is actually sold on board, so it’s incumbent on the airports to introduce these preventative measures to curb excessive drinking and the problems it creates, rather than allowing passengers to drink to excess before their flights,” Jacobs’ statement said. According to the BBC, Britain’s Home Office, which handles immigration and security, is considering the aircraft’s call for tougher alcohol rules.

Duty-free alcohol is already banned from being imbibed on board Ryanair flights, and passengers flying from Glasgow, Scotland, and Manchester, England, to Alicante and Ibiza in Spain are prevented from carrying duty-free alcohol onto the aircraft and instead are asked to put it in the hold or leave it behind.

Last year, a Code of Practice was introduced by the U.K. Aviation Industry to counteract disruptive behavior at the airport and on-board aircraft. The Code stated that airports would “seek to ensure that their bars, lounges and restaurants follow best practice when selling or supplying alcohol” and retailers would “advise passengers not to open and consume alcohol before or during their flight.”

Despite the introduction of the Code, a recent BBC investigative documentary found that 387 drunken passengers were arrested between Feb. 2016 and Feb. 2017 — a nearly 52% increase on the previous year. The Civil Aviation Authority (CAA) also reported a 600% increase in disruptive passenger incidents in the U.K. between 2012 and 2016 with most “involving alcohol”. 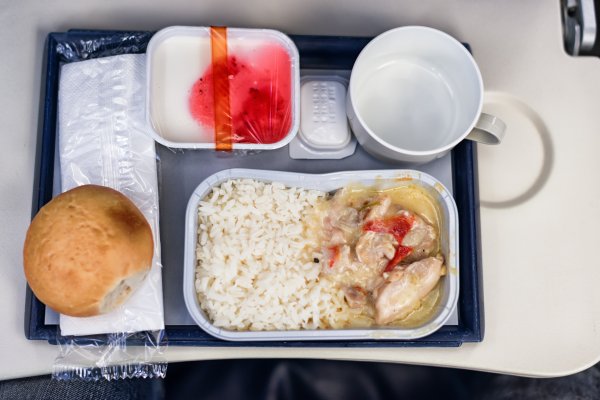 The Real Reason Why Airplane Food Tastes So Bad
Next Up: Editor's Pick