Migrants on Greek Islands Are Trapped and Desperate, Report Says

E.U. Migration Commissioner Dimitris Avramopoulos talks with migrants during his visit to the Moria migrant camp on March 16, 2017 on the island of Lesbos, almost a year after an EU-Turkey deal.
STRINGER—AFP/Getty Images
By Tara John

Thousands of asylum-seekers in Greece’s Aegean islands are stranded in appalling circumstances, according to a new report by Refugees International.

Since a 2016 deal between the E.U. and Turkey, which aims to discourage migrants from crossing the sea to Greece, Turkey has agreed to take back migrants who arrived to Greek islands from its territory. But in reality very few have so far been relocated, according to Refugees International — just 1,210 as of June 13.

The result, says a new report entitled “Like a Prison”: Asylum Seekers Confined to the Greek Islands, is thousands of asylum-seekers trapped in overcrowded and unsafe accommodation on the Greek islands. This “containment” has taken a psychological toll, says the advocacy group, based in Washington, D.C. The report describes how some migrants on the islands of Chios, Lesvos and Samos feel trapped and anxious about the lack of available services. “Greece’s policy of containing people on its Aegean islands is having devastating effects on people’s physical and mental health,” said Izza Leghtas, senior advocate for Europe at Refugees International, said in a statement.

More than 12,000 migrants have crossed from Turkey to Greece this year, according to the IOM, a considerable drop in numbers compared to some 161,000 arrivals during the same period a year before. “Because far fewer people are arriving along this route than in 2015, the EU and Greece are presenting the EU-Turkey agreement as a success”Leghtas said. “The reality is that thousands of people, many of them traumatized from war or persecution, are trapped and unable to get the help they need.”

TIME has written about the mental strains placed on migrants languishing in Greece in “Finding Home,” a multimedia project which has been following three Syrian refugees since Sept. 2016 as they prepared to give birth and raise a child in foreign countries. Read more here. 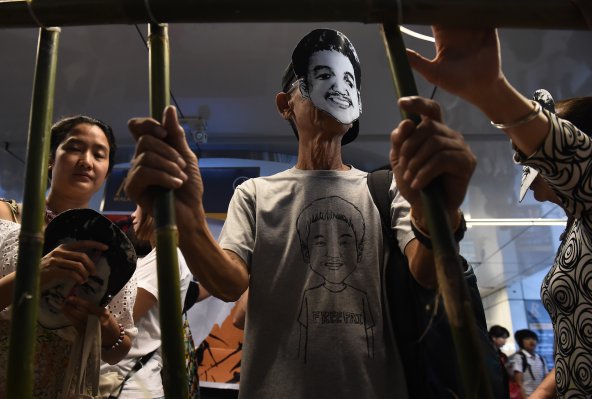