Protesters shout slogans and hold signs against President Donald Trump in front of Trump Tower in New York ahead of his first visit to the building since taking office, on Aug. 14, 2017.
Andres Kudacki—AP
By Melissa Chan

Outraged over U.S. “threats and sanctions,” Iranian President Hassan Rouhani warned his country could restart its nuclear program as soon as “an hour and a day,” according to the Associated Press. Rouhani said revitalizing its nuclear program could return Iran “to a more advanced level” than 2015, when Iran reached a nuclear deal with the U.S. and other world powers.

Taylor Swift wins case against man who groped her

Taylor Swift was awarded the $1 she asked for after a jury determined a former DJ did in fact grope her during a backstage meet-and-greet four years ago. The pop star had testified against ex-radio host David Mueller, who was fired after the 2013 incident.

North Korea is holding off on attacking Guam but is still warning the U.S. against “reckless actions.”

Protesters in North Carolina tore down a Confederate statue.

A Holocaust memorial in Boston has been vandalized for the second time this summer.

Ryan Reynolds said he’s “heartbroken” after a stunt driver died on the set of Deadpool 2.

Pantone announced a customized purple color in honor of Prince. 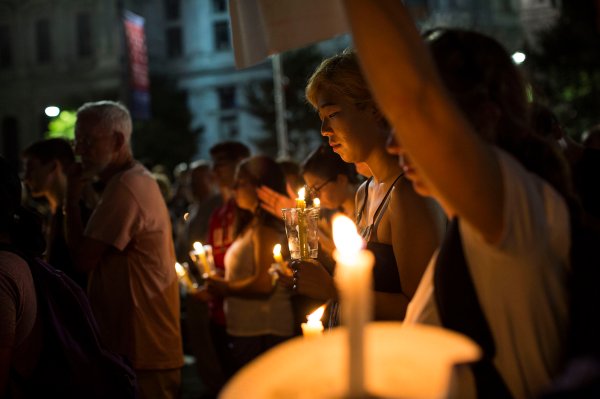