We Need to Redefine What 'Working Class' Means

Republican Presidential candidate Donald Trump models a hard hat in support of the miners during his rally at the Charleston Civic Center on May 5, 2016 in Charleston, West Virginia.
Mark Lyons—Getty Images
Ideas
By Joan C. Williams
Williams is Distinguished Professor of Law, University of California Hastings Foundation Chair, the Founding Director of the Center for WorkLife Law at University of California Hastings College of the Law and the author of White Working Class: Overcoming Class Cluelessness in America.

Americans curry a convenient deafness when it comes to class. The topic makes us uncomfortable, so we try to make it disappear by describing ourselves all as “middle-class.” But when we put all Americans into one big, unwieldy category, everyone ends up confused — to the extent that policymakers and political analysts for a long time have ignored a wide swath of the American people, a segment that decided the presidential election and is now the focus of both political parties.

The confusion comes from three sources.

First, we define middle income far too loosely. A recent Bloomberg story reported from the Mall of America quoted an amusement park worker earning $22,000-a-year and a lawyer earning $200,000 both calling themselves middle class. Neither is. The amusement park worker, if she lives alone, is poor: She’s almost exactly at the median for American households in the bottom 30% — $22,500 in 2015, according to calculations I made with the help of Heather Boushey and Kavya Vaghul of the Washington Center for Equitable Growth. The lawyer is rich, in the top 6% of American earners: He’s part of the professional-managerial elite, whose median in 2015 was $173,175.

The middle roughly 50% of Americans who are neither rich nor poor are the true middle class. Harvard scholar Theda Skocpol has called this group the “missing middle” because they are so often erased from view by our muddied overexpansion of “middle class.” Their median household 2015 income was $75,144. The most affluent members of this group (at the 90th percentile) are married families of, say, a radiation therapist (median pay: $70,010) and a police officer (median pay: $61,600).

But class should not be determined by income alone — that’s the second source of Americans’ confusion about class. In our definition of the missing middle, we included American households with high incomes but no college graduate. Why? Because while class is highly correlated with income, it’s expressed through cultural differences of which graduating from college is the single most important example. Americans who graduate from college typically live very different lives than those who don’t. College grads typically become professionals, and professionals tend to have what sociologists call “entrepreneurial networks”: broad national networks of acquaintances who help them get jobs and do deals. Non-elites, in contrast, typically live their lives in tight, rooted “clique networks” of people who have known each other forever and help each other out with everything from babysitting to house repairs.

Family ties are different, too. Families often remain central in the lives of adult children of those outside the elite — the missing middle as well as the poor. Among the college-educated elite, families often live far apart, and their ties are chiefly emotional rather than economic. Americans in different class locations live deeply different lives — in bubbles that rarely intersect.

The final reason class becomes confusing is that different groups use the same terms differently. The professional-managerial elite typically calls itself “upper-middle class” and those in the middle “working class.” The missing middle calls itself “middle-class” and elites “rich.” Sometimes — especially on the left — “working class” is used as a euphemism for the poor. No wonder Americans are confused.

This puzzlement becomes a problem in politics. What delivered the Electoral College for Donald Trump in 2016 was a regional effect: about 80,000 votes in Rust-Belt states like Michigan, Wisconsin and Pennsylvania. The key group was the now-famous “white working class,” who trended for Trump. Analyses that deny this often assume that “working class” is a euphemism for the poor, and point out that the poor did not deliver Trump the election. This is true, but irrelevant — no one is arguing they did. The “white working class” that trended for Trump is the have-a-littles, not the have-nots: Trump performed best among voters earning between $50,000 and $100,000.

Other analyses use income cut-offs to make the missing middle slide conveniently out of sight. The most influential example was a FiveThirtyEight post from May 2016 titled, “The Mythology of Trump’s Working Class Support.” Nate Silver wrote, “It’s been extremely common for news accounts to portray Donald Trump’s candidacy as a ‘working-class’ rebellion against Republican elites.” He added, “As compared with most Americans, Trump’s voters are better off.” While conceding “elements of truth” to the view that the working class was going for Trump, Silver attempted to disprove it by pointing out that the median household income of Trump primary voters was $72,000 — well above the national median of $56,000.

But median income (the point at which 50% of Americans have higher incomes, with 50% lower) is a fatally flawed measure of the missing middle. By using $56,000 as the cut-off, Silver diluted the votes of missing-middle voters who trended for Trump by lumping them with poor voters who didn’t.

Others keep repeating this mistake in slightly different ways. One recent Washington Post article divided voters into those earning less than $50,000 and those earning more. That again mixes low-income voters who did not trend for Trump in with middle-income voters who did. The same Post article also makes a truly lame argument: that lacking a college degree is an inaccurate proxy for who is “working class” because Bill Gates and Mark Zuckerberg are not college grads. The existence of a few outliers does not disprove the validity of a demographic generalization.

While a few commentators still deny the class dynamic that determined the 2016 election, both Democrats and Republicans have now placed middle-class jobs at center stage. Trump did so during the election. Democrats’ new Better Deal: Better Jobs, Better Wages, Better Future does so, too.

The emerging battle lines will have Republicans arguing supply-side economics: that a huge tax cut will create jobs by unleashing growth. Democrats will insist that tax cuts will only deliver larger fortunes to the children of the 1% or (at best) the low-wage low-hours jobs that have eviscerated so many families and communities. But the important fact is that now both political parties place middle-class jobs front and center.

We hear day after day about how fractured and bitter American politics have become in the age of Trump. We hear less about this: For all the drama, the Donald has delivered a new consensus. Hardworking Americans want jobs and politicians of both parties are paying attention. The missing middle is missing no more. 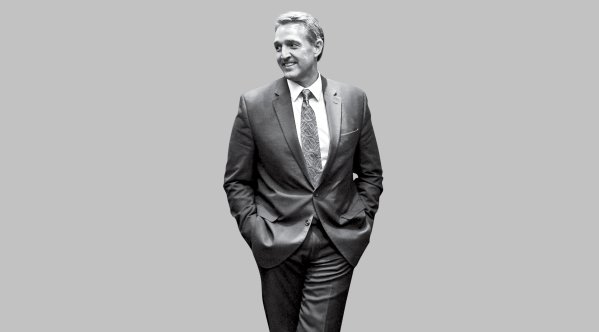 8 Questions with Jeff Flake, Republican Senator from Arizona
Next Up: Editor's Pick