Following Jon Snow and company’s departure from Eastwatch-by-the-Sea in Sunday’s episode of Game of Thrones, Westeros’ dream team looks set to face down the army of the dead at an eerily significant location in season seven’s penultimate installment.

In a shot from the episode six promo, the Hound and Thoros of Myr can be seen surveying a mountain beyond the Wall that appears to be the same one the Hound saw in his vision in the flames. “Ice, a wall of ice. The Wall,” he described. “It’s where the Wall meets the sea. There’s a castle there. There’s a mountain, looks like an arrowhead. The dead are marching past, thousands of them.”

However, this might not be the first time we’ve seen this particular location. Eagle-eyed Reddit user RKRagan pointed out that a very similar mountain appeared in the background of the flashback sequence in which Bran Stark witnessed the Children of the Forest create the White Walkers thousands of years ago. However, in that scene, we saw the mountain from the other side when it wasn’t yet covered in snow.

If these places are indeed one and the same, it can’t be a coincidence that Thrones has spent the entire season building toward a major battle there. Unfortunately, judging by both the promo and season seven trailers, things aren’t looking too good for the living. “Death is the enemy — the first enemy and the last,” Beric tells Jon in the promo. “The enemy always wins. And we still need to fight him.” 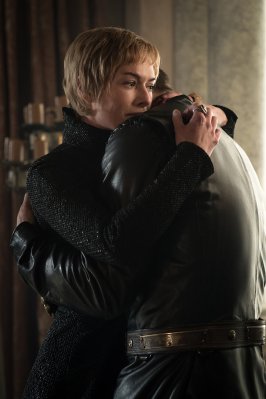 Is Cersei Lannister Really Pregnant on Game of Thrones? How Her News Might Fulfill a Fan Theory
Next Up: Editor's Pick