From Selma to Charlottesville, the Ghosts of Our Past

There’s nothing quite like being on vacation halfway around the world and trying to explain American-style racism.

As an African American, the locals expect me to be an expert on these matters. The backstory of every nation features different players, but the narrative is essentially the same: one group contests the humanity of another group or groups to gain power and privilege.

Part of what makes it so hard to explain the American holocaust of slavery is that over a century later, people still don’t want to tell the truth about it, which makes it impossible to honestly assess and own up to what’s happening right now. My grandmother, Big Mama, born a sharecropper in Jim and Jane Crow Mississippi, used to always tell me, “You can’t start out wrong, and end up right.”

After turning on my phone from a self-imposed news blackout, I immediately saw the news out of Charlottesville, Virginia, and just as immediately, I thought about America’s segregationist past.

In March of 1965, Viola Liuzzo, a housewife and mother of five from Michigan, traveled to Alabama to help Dr. Martin Luther King, Jr., and his Southern Christian Leadership Conference register Black voters. Not long after her arrival, she was killed by the Ku Klux Klan.

As soon as she arrived in Selma, Liuzzo joined the movement’s carpool system of driving around civil rights marchers. While she drove a 19-year-old black man named Leroy Moton in her car, Liuzzo was ambushed by a car full of Klansmen.

Liuzzo was the first white female protester to die in the civil rights movement, and when the nation saw live news coverage of her murder by the Klan, it changed the conversation about civil rights in the nation, and helped to speed up passage of the Voting Rights Act.

Fast forward over 50 years later, and another white woman protesting for freedom and justice is killed, this time at a rally protesting the Klan. Heather Heyer was a 32-year-old legal assistant who had repeatedly championed civil rights issues on social media and regularly drew attention to cases of police malpractice and racism.

The parallels are eerie, and yet the tragic loss of these two precious lives raises unsettling questions about whether Donald Trump is the only one who engages in false equivalency.

Do you believe that the outrage in the nation would have been the same if the victim killed by that surging car had not been a young white woman, but rather a young black man, like the one seen being hurled through the air like a rag doll in that photo, now seen around the world?

Do you believe that the racist marchers can legitimately claim the right of victimhood just because they were met by peaceful counter-protestors? When did they turn free speech into a one way street?

Do you believe that guns would not have been drawn and discharged, had those protestors that we saw pummeling the police been black instead of white?

I’m sick and tired of our situational, conditional and ephemeral moral outrage.

With all due respect to the president, he’s a joke. But the joke is on us, unless and until we get serious about freedom and justice, equal opportunity and fundamental fairness for all.

Until then, Trump can cling to his “law and order” trope, all day, every day. But there is no peace without justice. Viola Liuzzo understood this, which is why she traveled to Selma. “This is everybody’s fight,” she told her family.

Heather Heyer understood it as well. Her Facebook cover photo read, “If you’re not outraged, you’re not paying attention.”

It’s time for us to start paying attention, and moreover, paying it forward. So, if you’re one of the folk who hates the phrase “Black Lives Matter,” and prefer “Blue Lives Matter” or “All Lives Matter,” it’s your turn to step up.

In a real sense, what killed them is more important than who killed them. Are we ready yet to wrestle with that question? The only way for them to receive dignity in death—for their lives to truly matter — is for all of us to come to terms with what killed them: American-style hate. 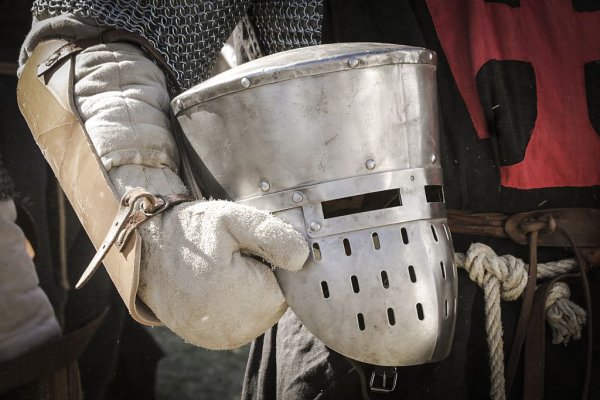 Shining a New Light on the Middle Ages
Next Up: Editor's Pick