A vehicle ran into a crowd of counter-protesters, leaving one person dead, after Virginia Governor Terry McAuliffe declared a state of emergency Saturday. The violence began in Charlottesville leading up to the “Unite the Right” rally.

The male driver of the car was arrested, Virginia Secretary of Public Safety Brian Moran told the Associated Press.

One person was killed and 19 others injured as the car drove into several hundred protesters marching peacefully in a long line the AP reported.

“I am heartbroken that a life has been lost here. I urge all people of good will–go home,” Signer posted.

On Saturday evening, a helicopter crashed in Charlottesville killing two people onboard, in an incident that officials told the AP was linked to the violent clashes. It was not immediately clear how the crash was related.

President Donald Trump addressed the violence at the rally when signing legislation regarding the Veterans Administration in New Jersey. Trump said he condemns the “egregious display of hatred, bigotry and violence on many sides.” He added that law and order must return to Charlottesville and that the situation will be studied to “see what we’re doing wrong as a country where things like this can happen.”

Trump did not take any questions after signing the legislation.

Governor McAuliffe declared a state of emergency for the area on Saturday morning.

“It is now clear that public safety cannot be safeguarded without additional powers, and that the mostly out-of-state protesters have come to Virginia to endanger our citizens and property,” McAuliffe said in a statement, adding that he is “disgusted by the hatred, bigotry and violence”

“We ALL must be united & condemn all that hate stands for. There is no place for this kind of violence in America. Lets come together as one!” he said.

Virginia State Police tweeted that protesters charged at authorities in the park Saturday morning. Arrests were being made, and there were injuries stemming from an altercation, the department said.

In light of the events, the University of Virginia also said its events and programming would be canceled. The university medical center will remain open, however.

Several hundred white nationalists gathered on the University of Virginia campus with torches in hand Friday night. There multiple reported injuries after the group clashed with counter-protestors.

“Our country encourages freedom of speech, but let’s communicate w/o hate in our hearts. No good comes from violence. #Charlottesville,” she posted.

The rally was expected to draw up to 6,000 people, according to the Associated Press. It comes after the city of Charlottesville voted earlier this year to remove a statue of Confederate Gen. Robert E. Lee. 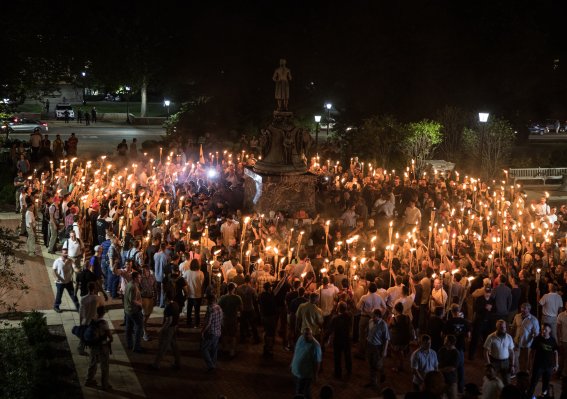 Torch-Carrying White Nationalists March Through UVA
Next Up: Editor's Pick