This picture taken on August 9, 2017 and released by North Korea's official Korean Central News Agency shows a rally in support of North Korea's stance against the US
STR—AFP/Getty Images
By Nafeesa Syeed, Bill Faries / Bloomberg

President Donald Trump warns the U.S. is “locked and loaded,” while Kim Jong Un’s regime says it could launch missiles toward U.S. territory in the Pacific as soon as next week.

Behind the scenes, however, it’s not clear that a major military confrontation is imminent. Trump’s sharp rhetoric is belied by the business-as-usual routines of the U.S. Defense Department, which has been on stand-by for a belligerent act from North Korea for decades.

Secretary of Defense James Mattis continued with a previously scheduled trip on the West Coast. Speaking to reporters in California on Thursday, he said that while it’s his job to be ready with military options, the U.S. is pursuing diplomacy. He praised last weekend’s unanimous United Nations resolution tightening sanctions on North Korea and said the U.S. “is gaining diplomatic results, and I want to stay right there, right now.” A back-channel used earlier this year to try to free an American held by Pyongyang is still active, according to the Associated Press, though it isn’t clear those involved are discussing the current crisis.

Trump himself has sent some conflicting signals about what would trigger a U.S. military response. He suggested Friday morning that the U.S. isn’t looking to make a pre-emptive strike, saying on Twitter that the military stood ready to act “should North Korea act unwisely.” Speaking to reporters Friday afternoon in New Jersey, he said that if Kim utters another “overt threat” or hits U.S. territory or allies he will “regret it fast.”

The U.S. military says it is always prepared for conflict on a moment’s notice. The motto of U.S. Army’s Second Infantry Division, based in South Korea, is “ready to fight tonight.”

“There’s always some degree of readiness, but in the face of these indications and warnings that North Korea is communicating deliberately, we’re going to no doubt have an even higher condition of readiness,” said Thomas Karako, a senior fellow at Center for Strategic and International Studies in Washington.

For military analysts, who discount public saber-rattling, there are several indicators to determine whether hostilities could be around the corner:

The USS Ronald Reagan, an aircraft carrier with more than 5,000 sailors that departed from its home port in Japan in May, actually returned to port this week “after a scheduled patrol to protect and defend the collective maritime interests of the U.S. and its allies and partners in the Indo-Asia-Pacific region,” according to ship’s Facebook page.

The Reagan had done exercises earlier this year with the USS Carl Vinson aircraft carrier, which Trump briefly deployed to Korean waters when tensions with Pyongyang ratcheted up earlier this year. The Vinson, however, is now back in San Diego after a training exercise off the California coast.

Japan is home to as many as six U.S. Navy vessels capable of defending against ballistic missiles, They are normally based at Yokosuka, on the eastern side of Japan. Just moving those ships toward the Korean peninsula would signal potential action to stop a missile launch is more imminent and would likely be seen as an urgent threat by Pyongyang. Asked about the ships’s current locations, the Pentagon said it wouldn’t “discuss operational schedules.”

Trump on Friday tweeted out a series of photos of long-range B-1B bombers at Andersen Air Force base in Guam, which North Korea has directly threatened. The bombers have long been a key tool in the U.S. arsenal for any renewed conflict in Korea, replacing B-52 stratofortress bombers used in earlier decades.

The U.S. also maintains jet fighters, including dozens of F-16s, at locations on the Korean peninsula, such as Kunsan Air Base on the country’s west coast, in addition to more than a hundred South Korean jets.

Preparations for conflict would also likely involve the departure, on a voluntary or mandatory basis, of family members of U.S. military and diplomatic personnel. Such a move would send a clear signal that the U.S. sees widespread conflict on the horizon, particularly because Seoul, the nation’s capital and most populous city, is just 35 miles south of the border separating the two countries.

“The canary in the coal mine for this is the surreptitious or overt evacuation of American military family members,” said Retired Army Major General Robert Scales, who commanded units in Korea and is the author of “Scales on War: The Future of America’s Military at Risk.” If that happens, “that tells you that things are getting bad,” he added in an interview.

On the North Korea side, if war were imminent, the government would probably undertake civil defense exercises, including rehearsing measures to open up underground tunnels and get Pyongyang’s elite to safer havens, as well as ramped-up, live-fire military drills, Scales said. The evacuation drills haven’t been seen in more than five years, he said.

And in South Korea, any sign the President Moon Jae-In is mobilizing army reserves would be “very, very serious,” said Scales.

“Until you see something like this go down, this is all just chatter,” Scales said. “You have to see something on the ground to believe that this is serious.” 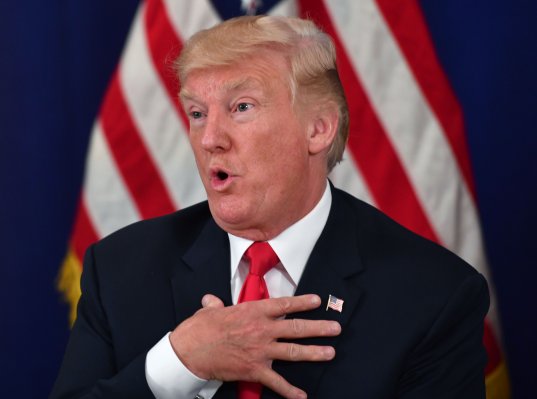 Trump Thanks Putin for Expelling Diplomats
Next Up: Editor's Pick