Venezuela's President Nicolas Maduro, right, and his wife Cilia Flores wave as they arrive to the National Assembly building for a session of the Constitutional Assembly in Caracas, Venezuela, Aug. 10, 2017.
Ariana Cubillos—AP
By Ian Bremmer

The writing’s on the wall, and Venezuelan President Nicolas Maduro is nearing the end of his four-year rule. Here, five reasons why:

1. He presides over an economy in the doldrums

Venezuela’s problems begin and end with its shambolic economy. As the possessor of the world’s largest oil reserves, Venezuela’s economy is disproportionately reliant on oil—95 percent of its export earnings are derived from oil; 25 percent of its GDP comes from oil and gas. Instead of developing its own industries and sectors, the country had been relying for decades on its natural wealth to import goods and services. Now it can’t afford them—800 percent inflation will do that. Since reaching a 5-year high in the summer of 2014, oil prices have tumbled more than 55 percent. Egregious macroeconomic management that included foreign exchange and price controls have made a lower-price oil environment that much worse.

Maduro isn’t helped by the fact that he succeeded the wildly popular Hugo Chavez as president of Venezuela, a politician so talented and successful that he championed his own unique strain of leftist politics we now know as Chavismo. All you have to watch is a video of Maduro speaking to crowds to see he has virtually none of the charisma of his predecessor (a fact he sometimes tries to hide by salsa dancing. Seriously).

Say what you will about Chavez, but he delivered results for the Venezuelan people. He was able to cut the number of Venezuelan households living in poverty from 55 percent in 1995 to 26.4 percent in 2009. When Chavez assumed office in 1999, unemployment was at 15 percent; by June 2009, it was at 7.8 percent. Of course, it helped that Chavez’s tenure coincided with a commodities supercycle that propelled the price of oil to never-before-seen heights during the mid-2000s. When Chavez passed away in March 2013, oil was selling at about $110 a barrel; today it’s selling at about $50. Charisma and talent are obviously important to political success, but so is timing. Maduro has none of the three.

3. His bumbling attempts at authoritarianism

In addition to presiding over an oil-rich economy at a time when oil is nowhere near the profitable commodity it once was, Maduro has also compounded his problems with a series of ham-fisted attempts to shore up his power base. To be fair, when you have an approval rating hovering around 20 percent, drastic measures probably need to be taken.

Maduro’s unpopularity resulted in his political opposition winning control of parliament in 2015, the first time in nearly two decades the institution wasn’t controlled by Chavistas in one form or another. Using judges that remain loyal to him, Maduro has spent the last months trying to dissolve the legislature and sideline his opponents. The ensuing uproar and protests led to his latest gambit—holding elections for a “Constituent Assembly” to rewrite the country’s constitution, with vast powers that include postponing presidential elections and extending a sitting president’s mandate indefinitely.

Elections for the Constituent Assembly were held last week, and surprising absolutely no one, the results delivered Maduro the decisive victory he desperately needed. Maduro’s government maintains nearly 8 million Venezuelans turned out to vote, though international observers peg the number closer to 3 million and assume that many of those who turned up were the 2.6 million government employees who weren’t given much choice to abstain. In addition to the U.S. and E.U., more than 17 countries in Latin America have decried the election as undemocratic.

4. He and his government are all alone

The international furor over the Constituent Assembly is just the latest sign of Venezuela’s increasing isolation; this past December, Venezuela was temporarily suspended by Mercosur, the Latin American trade bloc comprising Argentina, Brazil, Paraguay, and Uruguay. Last weekend, it was suspended indefinitely. You know your politics are dysfunctional when even Brazil thinks you’ve gone too far off the rails.

Most worrying for Venezuela though is China, which Maduro has counted on as being its lender of last resort, come what may. Between 2007 and 2014, Beijing lent Venezuela $65 billion—Beijing’s #1 destination for development loans during that period. For China—the world’s 2nd-largest economy with a GDP valued at $11 trillion (2015 figures)—$65 billion is a statistical rounding error. But now even China is refusing to rollover or extend new debt to Venezuela, a sign that Beijing has grown tired of throwing good money after bad in Venezuela, especially to prop up a weak government as universally unpopular as Maduro’s.

5. The country’s elite is losing faith in him

And if the Chinese have noticed Maduro’s unpopularity, you better believe those charged with shielding him from that unpopularity have too. So far daily rolling protests have claimed the lives of more than 120 protestors and at least 8 officers, often putting the security apparatus in the difficult position of following orders from their superiors or cracking down on desperate Venezuelans with whom they share plenty in common. But it’s getting harder to keep security forces in line—on Aug. 6, a group of former and active mid-ranking military officials took over a major military base near Valencia and declared themselves in active rebellion, with additional uprisings possible. The attack was put down by government forces.

Maduro has already detained more than 120 military personnel since the latest round of protests began in April, 30 of those for desertion and 40 for rebellion and/or treason. True, Maduro has gone to great pains to keep the military leadership on his side, personally promoting hundreds of Venezuela’s more than 2,000 generals and granting them special privileges. That includes handing many of them political careers; some 11 of the country’s 30 government ministers are current or former military officers. Unfortunately for Maduro, there aren’t near enough political posts in the country he can dole out to ensure his political survival. Watch this space. 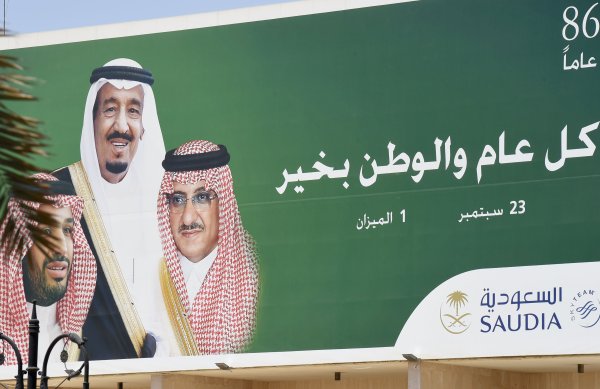 The 5 Countries Preparing to Fill a Big Vacancy at the Top
Next Up: Editor's Pick