Anthony Scaramucci, formerly the White House communications director for ten days, sat down for a one-on-one interview with Stephen Colbert on The Late Show to discuss his own version of the events that lead to his sudden departure.

It’s an interesting venue for the polarizing financier and unfiltered political figure, because the show has been seeing record breaking ratings for its biting satire aimed directly at Trump.

“I can’t believe it! We got The Mooch! We set out a Mooch trap,” Colbert joked on his show Wednesday.

It wasn’t Scaramucci’s first media appearance since his White House departure. He also went live on This Week with George Stephanopoulos.

Scaramucci stepped down from his short-lived role a little more than a week after President Donald Trump announced his appointment. In a profanity-laden recorded phone interview with The New Yorker, he took the opportunity to make explicitly worded critical statements about several members of the Trump Administration.

Reflecting on a few of his his former colleagues, the Mooch told Colbert that top White House advisor Steve Bannon, one of several staffers Scaramucci criticized during the now infamous call, would be out if it were up to him. “But it’s not up to me,” Scaramucci said. 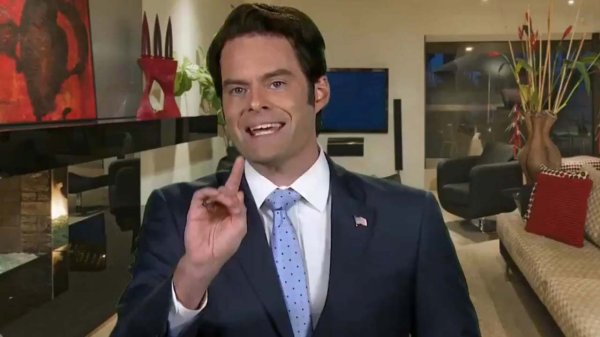 Bill Hader's 'Anthony Scaramucci' Showed Up to Clear the Air on Weekend Update: Summer Edition
Next Up: Editor's Pick