July 21, 1961, Worldwide Mercury Astronaut Virgil 'Gus' Grissom Is Pulled From The Ocean. His Spce Capsule 'Liberty Bell 7' Sank After He Opened The Side Hatch.
NASA/Getty Images
By Jeffrey Kluger

There was no happier place for America’s first astronauts than the ocean. In those pre-shuttle days, returning crews did not coast to a stop on an ordinary runway like a business traveler coming home after a commuter hop. Rather, any trip to space ended with an ocean splashdown. Touching the water meant that your journey was done, your mission was in the books, and all that remained was a celebratory reception on the deck of a Naval carrier, a happy reunion with your family in Houston and, if you were so inclined, a return to the flight rotation so you could begin to train for your next trip aloft.

But for Gus Grissom, who became the second American in space on July 21, 1961, the ocean offered no such safe embrace. Like Alan Shepard, the astronaut who had been the nation’s first star traveler less than three months earlier, Grissom was scheduled to make only a the briefest journey—a trip known as a suborbital flight. He’d leave the launch pad at Cape Canaveral, blast 120 miles into space, experience a few minutes of blackness and zero-g, then arc back over and drop into the Atlantic Ocean 300 miles off the coast of Florida. It was 17 minutes door to door—or pad to water. And that’s exactly the flight Grissom flew.

But the water, as it turned out, had nasty plans for him.

Week four of the podcast Countdown tells the tale of Gus Grissom’s historic mission, its disastrous ending, and how one of America’s pioneer astronauts managed to survive to fly another day. 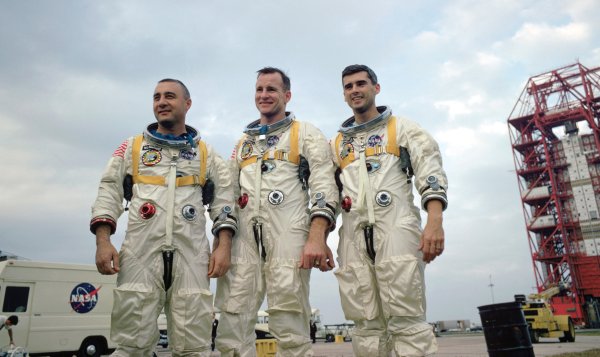 'Countdown' Podcast Episode 3: The Tragedy of Apollo 1
Next Up: Editor's Pick