Courtesy of the Leakey Foundation
By Rachel Lewis

The skull of an infant ape, found more than 13 million years after it died, may reveal how human ancestors looked during the period of time known as the Miocene epoch.

Researchers had been digging in the area west of Lake Turkana in northern Kenya for two weeks in 2014 without luck, until Kenyan fossil hunter John Ekusi began to inspect something after walking a couple of hundred yards away from the group, reports the Washington Post.

“If you’re a fossil finder, you know that look” Isaiah Nengo, the De Anza College anthropologist who led the discovery told the Post. “It’s like an atomic bomb can go off, and you don’t care, you’re so focused at what you’re looking for.”

“We’ve been looking for ape fossils for years—this is the first time we’re getting a skull that’s complete,” he added.

The skull — nicknamed Alesi after the local Turkana word for “ancestor” — is the best preserved of its kind ever found according to National Geographic, which partly funded the the discovery mission. After two years of further digs and sophisticated imaging work, the discovery was published in Nature journal on August 10.

The article says that fossils finds from 6 or 7 million years ago shed light on the ancestors that humans have in common with chimpanzees, but this older fossil will tell researchers much more about the common ancestors of all humans and apes.

The teeth in the skull reveal that Alesi belonged to a previously undiscovered species, now named Nyanzapithecus alesi, the Post reported. Until the discovery, scientists knew little about the Nyanzapithecus species, but now Nengo is able to conclude that N.alesi was a primate that lived more than 10 million years ago, as part of a group originating from Africa. 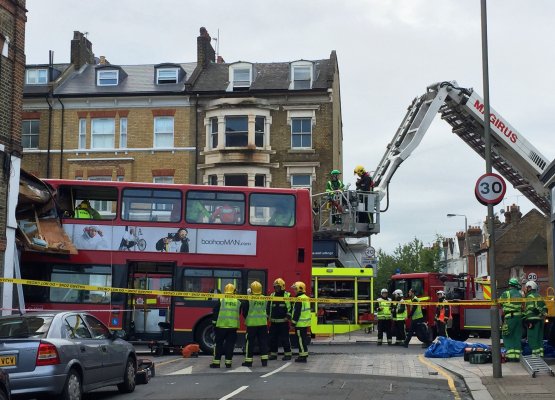 Double-Decker Bus Crashes Into Store in London
Next Up: Editor's Pick