John McCain Thanks Supporters After Cancer Diagnosis: I Am 'The Luckiest Guy on Earth'

John McCain has largely stayed under the radar ever since he dramatically returned to the Senate floor to vote against the Republican-led health care repeal late last month. But he made a quick appearance Wednesday to thank supporters for their well-wishes following his brain cancer diagnosis.

The GOP senator has been back home in his home state of Arizona undergoing treatment since his last appearance in the Senate chamber on July 28.

That night, he, along with Lisa Murkowski of Alaska and Susan Collins of Maine, voted against the so-called “skinny repeal” of Obamacare. All three were going against the will of their party, and McCain’s vote — which came towards the end of the late night gathering — drew audible gasps throughout the Senate chamber.

McCain has been diagnosed with glioblastoma, an aggressive form of brain cancer. It remains unclear when he will return to the Senate. 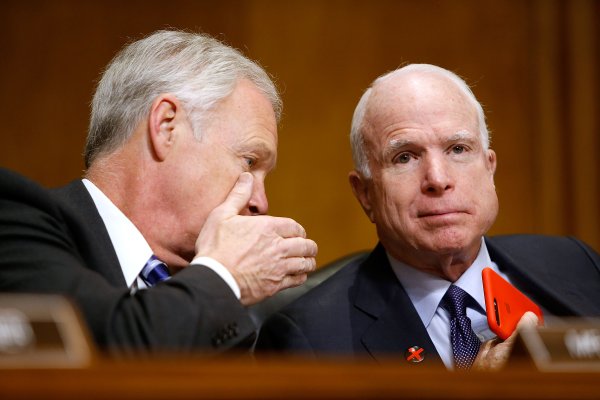 Senator Suggests McCain Voted Against Obamacare Repeal Because of His Brain Tumor
Next Up: Editor's Pick