Higginbottom is COO at CARE and a former U.S. Deputy Secretary of State for Management and Resources.

The leaked transcripts of President Donald Trump’s call with Australian Prime Minister Malcolm Turnbull have dominated headlines from Washington to Canberra, documenting the pique, the politics and the clash of personalities. Trump’s critics wield the transcript as evidence, they say, of a hopelessly unprepared Diplomat in Chief; his defenders point to the leak itself as the miscarriage of justice.

But among all the sound and fury, no one is talking about the substance of what these two leaders were fighting over — when the well-being of 2,000 actual human beings hangs in the balance.

Despite all they’ve read, most people likely remain unsure as to whether and how the refugee resettlement agreement between the United States and Australia will be honored. This isn’t just another Washington, D.C., “process story” — and shame on us if we let it become one.

I was the Obama Administration official responsible for negotiating the agreement with Australia’s Department of Foreign Affairs and Trade to bring relief to approximately 1,200 asylum seekers on the islands of Nauru and Manus, most of whom are held in detention centers there. These are people who risked their lives on makeshift boats to flee conflict and the lack of access to basic means of survival but were turned back by an Australian government that refuses asylum seekers who arrive by sea. As we fuss and fret over the clash of presidential and prime ministerial personalities, actual human beings suffer.

While the last Administration strongly pressed the Australian government to change its policy toward asylum seekers, we also sought to immediately relieve the suffering of these refugees and agreed to resettle up to 1,200 after they went through the U.S. government’s rigorous refugee screening processes. (Refugees are subject to the most thorough vetting of any visitor to the United States.) We also made clear that while we disagreed with their policy of detention, Australia is a critical ally — particularly in the Pacific — and a leader in humanitarian assistance and refugee resettlement globally.

I only know all this because of my former role as Deputy Secretary of State, not because of anything I am reading in the newspapers or watching on television — and that’s part of the problem. If we don’t even discuss the underlying facts of international debates and disagreements, how are we ever going to build anything resembling consensus to address them?

There’s no shortage of issues demanding our attention. Today, we are also experiencing the largest humanitarian crisis since the Second World War. Twenty million people are on the brink of famine — more than the populations of New York City, Los Angeles, Chicago, Houston and Philadelphia combined. But the American people remain largely in the dark; their news feeds are filled instead with coverage of Trump’s latest 140-character insult.

Two weeks ago, I was in Uganda, face-to-face with South Sudanese refugees. Nearly a million refugees have arrived in Uganda, which received the most refugees in the world last year and is now home to the largest refugee crisis in Africa. Eighty-six percent are women and children. One woman I met, Janet, had 11 children to care for — her own four, four were the children of other relatives who couldn’t make the journey, as well as three malnourished children of her brother who was slaughtered in the war. With tears spilling down her face, Janet spoke about her inability to feed the children, that despite the relative safety of the refugee settlement in Uganda there simply wasn’t enough food. Why? Because funding hasn’t materialized. The United Nations estimates that the humanitarian response has only 35% of the resources needed to keep people from starvation. The World Food Program has been forced to cut rations while the problems stemming from drought, civil war and violent extremism only grow.

Janet isn’t reading Twitter or watching cable. She doesn’t care who leaked what transcript or what world leaders got snippy with each other. She’s another voiceless casualty of our politics of mass distraction.

When America leads, the world follows. From the first CARE Packages that Americans sent to families in war-torn Europe 70 years ago, to President Ronald Reagan on national television rallying America to intervene in Africa’s famine in the 1980s, the United States leads the way to stopping hunger.

But Americans can’t solve a crisis they don’t know about. Sensationalism and sound bites can’t feed Janet’s children and the millions like her — only we can. 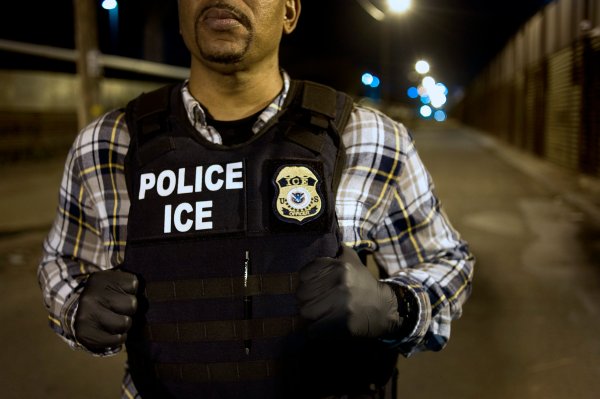 Immigration Raids Are Sweeping Up More People Who Weren't Targets
Next Up: Editor's Pick