How Trump’s Policies Are Fueling the Culture Wars

Reverend Jesse Jackson speaks during a demonstration outside the Trump International Hotel Las Vegas ahead of the third presidential debate in Las Vegas, Nevada, U.S., on Wednesday, Oct. 19, 2016. The debate, moderated by Chris Wallace of Fox News, will be the final meeting of Donald Trump and Hillary Clinton ahead of the November 8 presidential election. Photographer: Daniel Acker/Bloomberg
Daniel Acker—Bloomberg
By Laura Colby, Erik Larson / Bloomberg

Call it the anti-diversity administration.

U.S. President Donald Trump is on course to reverse decades-old efforts to empower and protect minorities. Affirmative action policies at colleges and universities are being reviewed by the Justice Department. Trump supports curbs on immigration of non-English speakers and proposed a ban on transgender people in the military. He says it’s time to stop political correctness.

But civil rights’ advocates promise him a fight at every turn — and a philosophically divided Supreme Court will likely be the final arbiter on the most contentious issues.

Trump’s backers say the change in tone is welcome. “Diversity is a way of justifying discrimination — hiring people based on their race, and that’s a violation of federal law,” said Hans von Spakovsky, a lawyer at the conservative Heritage Foundation. “That’s what the prior administration wanted to ignore.”

The effects are rippling across America, with workers stepping out and challenging companies’ policies on diversity. A Google engineer wrote a memo arguing that men were more suited biologically to work in tech than women, drawing support of Breitbart News — the right-wing website that was run by Trump’s chief strategist Stephen Bannon. Google fired the employee this week.

Conservative commentators like Bill O’Reilly and Glenn Beck, and websites including the Drudge Report and Breitbart have railed against political correctness for years. What’s new is that the culture warriors now have a backer in the highest office in the land against rights’ advocates.

“We must stop being politically correct,” Trump wrote on Twitter in June, criticizing the mayor of London’s response to a terror attack attributed to radical Islamists that left seven dead. “If we don’t get smart it will only get worse.”

Trump’s stance appeals to his mostly white base, which has felt left behind in a country where they will be a minority by mid-century. His policies are also a sharp rebuke to predecessor Barack Obama, the first black president, and a vocal advocate for diversity.

Trump “is showing a radical disregard for the civil rights accomplishments of the past 50 years,” said Reverend Jesse Jackson, who marched in 1965 with Martin Luther King Jr. in Selma, Alabama, and organized the Rainbow Coalition in 1984. “All elements of inclusion are under attack. It’s a countercultural revolution.”

Although the majority of Americans say an increasingly diverse population is positive — the percentage of whites has fallen from 84 percent in 1965 to 62 percent in 2015, according to the Pew Research Center — there is a deep political divide. According to a Pew poll last year, 78 percent of Democrats agreed that immigrants strengthened the country — compared with 35 percent of Republicans.

That division was particularly pronounced after Trump announced plans in January to ban entry to the U.S. to people from seven mostly Muslim countries. The move was backed by 81 percent of Republicans and only 9 percent of Democrats, according to a February Pew poll.

From executive orders to early morning tweets, Trump has used every means to get his anti-diversity message across. His administration is a reflection of his attitudes. Eighteen of the 24 cabinet members are white males. That’s a break from the trends of earlier presidents, who had increasingly surrounded themselves with more women advisers and people of different races. About a third of Obama’s cabinet was composed of white men.

“This administration is signaling in not so subtle ways that we’re not as concerned about civil rights anymore,” said Clayborne Carson, a Stanford historian who has spent most of his professional life studying King Jr. “The impact is that certain people are going to feel empowered to move in a different direction from the ideal of diversity.”

When the Google engineer was fired, the free-speech platform Gab offered him a job, as CEO Andrew Torba said “Silicon Valley exists in a bubble world where Wrong Think is not permitted.”

The administration will have to fend off legal challenges to the president’s anti-diversity policies. The American Civil Liberties Union and other groups have sued to overturn Trump’s actions, often with the support of coalitions of Democratic state attorneys generals.

The administration is also looking to the courts to further its agenda. The Justice Department intervened in an employment lawsuit, arguing that federal gender-discrimination laws shouldn’t apply to sexual orientation, reversing course from the past decade of court rulings.

The U.S. Supreme Court, where justices are divided between conservatives and liberals, is already set to decide in October whether Trump’s travel ban is constitutional. The make up of the court may change to become more conservative if members of the liberal wing retire in the next two years, as the challenges to Trump’s policies wind through lower courts.

Even if some or all of these efforts fail to get off the ground or crumble in court, they send a message to Trump’s base that the embrace of diverse groups that was a signature of the Obama administration is no longer a go. 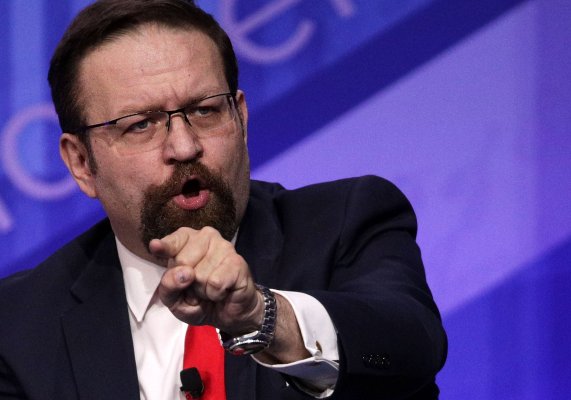