Deputy Assistant to the President Sebastian Gorka said Tuesday that the White House will remain silent about the August 5 attack on a Minnesota mosque until the results of the investigation are finalized.

A bomb was thrown through the window of a mosque, the Dar Al Farooq Community Center in Bloomington, Minn. on August 5. No one was injured, but worshipers were in the building when the bomb was thrown. The FBI has taken the lead on the investigation. Although the Department of Homeland Security issued a statement that day stating they were in contact with Minnesota officials and expressing support for people to freely worship their religion, neither Donald Trump nor the White House has issued an official statement.

“When we have some kind of finalized investigation, absolutely,” Gorka said on MSNBC Tuesday when asked about a response. “There’s a great rule; all initial reports are false, you have to check them you have to know who the perpetrators are. We’ve had a series of crimes committed, alleged hate crimes by right-wing individuals that actually turned out to have been propagated by the left. So lets wait and see, lets allow the local authorities to provide their assessment and then the White House will make its comments.”

Trump himself has previously tweeted misleading information about terror attacks when investigations are in their earliest stages, particularly when he believes the perpetrators to be Islamic terrorists. When MSNBC’s Stephanie Ruhle noted to Gorka that the President Trump had weighed in on attacks in London before there was sufficient information, he replied, “sometimes an attack is unequivocally clear for what it is. When somebody shouts “allahu akbar” as they’re stabbing a police officer, its pretty clear its not a case of the mafia robbing a bank, wouldn’t you say so?”

Trump is currently on a 17-day vacation at his golf club in Bedminster Township, N.J., but has sent over 20 tweets so far about a variety of subjects ranging from what he deems unfair media coverage to Connecticut Senator Richard Blumenthal. On Tuesday, he also participated in a briefing on the opioid crisis and weighed in on escalating tensions with North Korea.

“He really needs to speak out against these type of things, because those who support him take his silence as tacit support,” Ibrahim Hooper, the national communications director for the Council on American Islamic Relations told Politico.

When pressed again why he was tweeting about other topics but declining to weigh in on the incident in Minnesota, Gorka said it wasn’t his job to school the President on social media, because Trump had demonstrated his expertise on that medium by winning the election.

“Just hold your horses, count to ten, and the President will do what he deems fit,” he said. 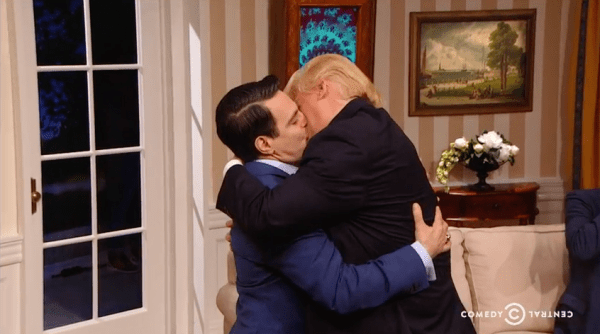 Watch Mario Cantone's Scaramucci Explain Himself
Next Up: Editor's Pick