Relive the 15 Most Gruesome Death Scenes on Game of Thrones

This ranking is not based on emotional resonance. Yes, we wept when Stannis Baratheon burned his daughter Shireen and when the origin of Hodor’s name was revealed as he sacrificed himself to save Bran Stark. But the camera luckily cut away before we actually saw either of those two characters suffer too much. These are the scenes that made you scream and cover your face because they were almost too disgusting for television. Almost.

In order to make this list, at least part of the death had to appear onscreen. Yes, Joffrey shooting Ros to death with a crossbow is horrid but, thankfully, we don’t actually see it happen.

MORE: Every Character Who Has Died on Game of Thrones

Enjoy reliving these highlights or lowlights, depending on your perspective. And remember: valar morghulis.

15. Lyanna Mormont stabs a wight giant in the eye as she is crushed to death

This is particularly brutal given the fact that Lyanna may be a warrior, but she’s still a child. At least she took a giant down with her.

What makes this scene particularly gruesome (and this writer a bit worried about how much Arya enjoys killing people) is that Frey is unknowingly eating his sons in a pie before he gets his throat slit.

13. Styr bludgeoned in the head with a hammer by Jon Snow

12. The Flasher’s head smashed by the Mountain

Let this be a lesson to flashers everywhere.

We haven’t seen Drogo since season one, so it’s easy to forget what a badass he was. He defeated Mago in single combat without any weapon by ripping his throat out.

Getting your throat ripped out is bad. Having someone eat your throat out is worse. Tormund finishes the job by stabbing Smalljon in the darn face.

9. Trystane Martell speared through the face by the Sand Snakes

…But that was Trystane’s best feature!

8. Ramsay Bolton eaten by his own dogs

On an emotional level, this was extremely fulfilling. Objectively, it’s a horrifying way to go.

Another villain gets his comeuppance — and how telling it is that literally no one helps Joffrey except for his own parents. But, as Lady Olenna told Jaime before her own death, Joffrey’s demise looked mighty uncomfortable: “I’d hate to die like your son — clawing at my neck, foam and bile spilling from my mouth, eyes blood red, skin purple.”

They did say he’d get his golden crown. Also the most telling part of this scene is when Jorah warns Daenerys to look away, and she says no. She likes watching her enemies burn. (Dany burns plenty of people alive. Those victims didn’t make this list because watching someone get roasted by a dragon just isn’t as traumatic an experience for some reason. Probably because dragons aren’t real, but molten gold is.)

We always knew Theon was no Ned Stark, but he can’t even get a beheading right. This is truly awful to watch.

2. Meryn Trant’s eyes stabbed out before being stabbed by Arya Stark

Again, Arya enjoys vengeance a little too much. A quick throat slash would have sufficed.

1. Oberyn Martell’s face squished like a grape by the Mountain

It’s hard to imagine anything on Thrones will ever top the horror of this moment. 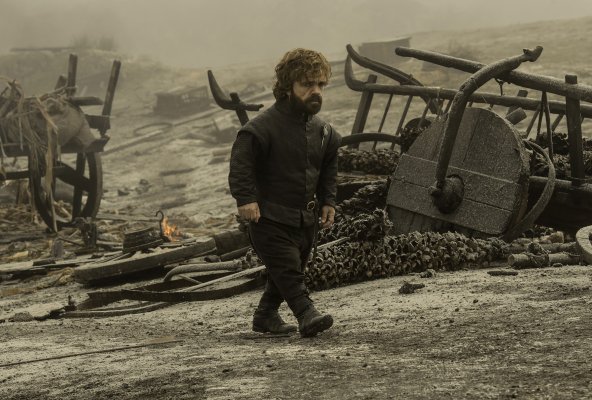 Decoding Tyrion Lannister's Reaction to Jon Snow and Daenerys in the Game of Thrones Finale
Next Up: Editor's Pick