Following the fan-adored fighting action between Gwendoline Christie‘s Brienne of Tarth and Maisie Williams’ Arya Stark on this season of Game of Thrones, there’s an update.

Christie sent a sweet tweet to Williams on Monday: just her name, plus a sword fight emoji and kissing face emoji. In Sunday’s episode, “The Spoils of War,” the legendary knight and skillful Stark assassin finally had a chance to spar during an encounter at Winterfell, with Arya’s unusual training proving a boon in the face of Brienne’s more traditional moves. In the end, the much-smaller Stark came out on top, with Brienne duly impressed by her quick work.(Littlefinger and Sansa, who looked on from above, were equally unnerved.)

Arya’s ensuing request? That she be able to train with Brienne.

“Arya and Brienne are both very intrigued by each other and it’s nice of them to meet again in a much safer and happier circumstance,” Williams told Entertainment Weekly of the on-screen encounter.

While we don’t know for sure how their next moves may may play out in the episodes left in the seventh season, this little emoji-filled hint from Christie suggests there’s adoration between the pair of quick-fighting actors. And you can bet that fans would be eager to watch their friendship and mentorship play out onscreen. 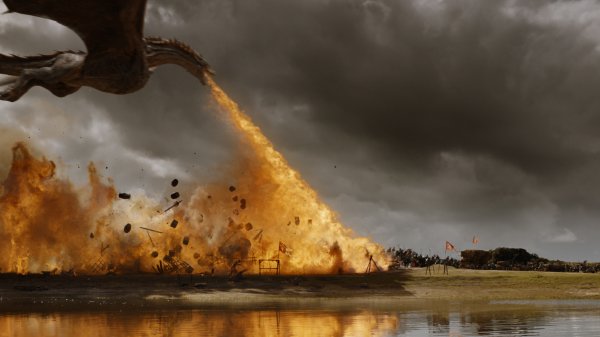 Game of Thrones Gave the Internet the Perfect GIF for All Your Everyday Problems
Next Up: Editor's Pick