The Trump Administration Pledges to Crack Down on Leaks

The Trump administration on Friday announced a new effort to crack down on leaks, promising to prosecute the sources of disclosures of classified information and to review the legal protections of journalists.

Speaking at the Department of Justice a day after transcripts of President Donald Trump’s classified conversations with foreign leaders appeared in The Washington Post, Attorney General Jeff Sessions condemned the disclosures as damaging to national security. He called them the latest in an escalating series of disclosures which has led to a tripling of the number of active Department of Justice leak investigations.

“This culture of leaking must stop,” Sessions said.

The announcement comes after months of embarrassing disclosures about the Trump administration, which spurred President Trump to call on the FBI and the Justice Department to get tougher on leaks. In recent weeks Trump specifically urged Sessions—a target of the President’s ire for recusing himself on matters related to Russian meddling in the 2016 election—to boost leak prosecutions.

Many of those investigations deal with the unauthorized disclosure of classified information, whether to the news media or foreign powers. Sessions announced that the department is “reviewing policy affecting media subpoenas.” The existing departmental policy was formulated by President Barack Obama’s former attorney general, Eric Holder, after consultation with media executives in Washington. That policy requires sign-off from the attorney general before initiating a subpoena or prosecuting journalists, whose work is protected by the First Amendment.

“We will not allow rogue anonymous sources with security clearances to sell out our country any longer,” Sessions said.

Deputy attorney general Rod Rosenstein said the department was in the early stages of reviewing the 2015 regulations, and would consult with news executives before finalizing any changes. “Leaks to the media are not whistleblowing,” Rosenstein said.

Rosenstein also announced the formation of a designated unit of FBI investigators to probe leaks of classified information to the news media.

Director of National Intelligence Dan Coats, whose subordinate agencies make leak referrals to the Justice Department, said that recent breaches include “some of the worst compromises of classified information in our nation’s history.”

“We are prepared to take all necessary steps to one identify individuals who illegally expose and disclose classified information,” said Coats, who argued they have put American operatives, troops, and sensitive programs at risk.

Coats added that the leaks don’t always originate in the intelligence community, but that some in the Executive Branch and Congress are also responsible—and that all those entrusted with access to classified material must be more vigilant.

Coats said those with worries about government actions have ample opportunities—both with inspectors general and Capitol Hill—to register their concerns.

“Understand this: if you improperly disclose classified information, we will find you, we will investigate you, we will prosecute you to the fullest extent of the law, and you will not be happy with the end result,” Coats said.

Rosenstein would not comment on whether the leak crackdown is being undertaken in response to President Trump’s concerns, but said that many across government share the President’s views. 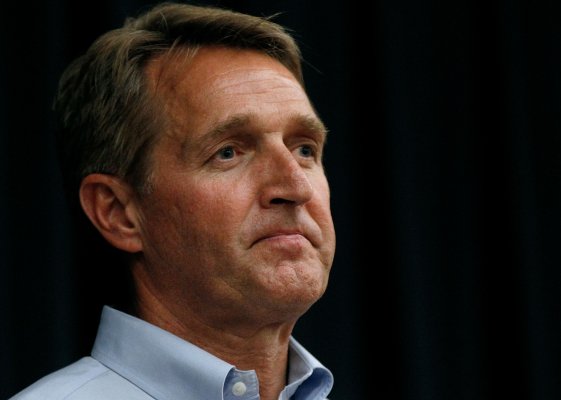 Meet the Republican Senator Who Called Out President Trump
Next Up: Editor's Pick