After trying to go-it-alone on a failed health care repeal, the White House is cozying up to the outside conservative groups that many in the Administration distrust or feel were insufficiently supportive during the 2016 campaign. If President Trump is going to prevail on his other goals, like tax reform, he will need this kind of boost from potential allies.

On Friday, the White House plans to announce it is sending Vice President Mike Pence to a major gathering of tea party-minded activists in Richmond, Va., on Aug. 19. Organized by Americans for Prosperity, the Defending the American Dream confab is one of the largest public-facing events linked to the political and policy network convened by billionaires Charles and David Koch. The conference tends to set the tone for the year among the more than 2 million grassroot activists who push for lower taxes, less regulation and fewer subsidies.

The announcement comes on the heels of this week’s summit that brought together Treasury Secretary Steve Mnuchin, White House legislative affairs chief Marc Short and Americans for Prosperity president Tim Phillips to talk about rewriting the tax code. With that looming on the fall’s legislative agenda, the White House is trying to do a better job of listening to conservatives’ ideas than it did on health care, as well as to give the very voters who helped Trump a legislative victory.

As it was, the health care debacle split the White House from conservative organizations. Leaders at places like Americans for Prosperity, FreedomWorks and the Heritage Foundation all thought the plans being considered in Congress—and cheered by the President—were insufficient at rolling back the law they call Obamacare. Instead, they wanted an absolute repeal. In the case of the Koch network, officials said they would provide television ads defending lawmakers who voted against the scaled-back repeal measure.

In the end, only the House passed any legislation aimed at the health care law. Three Senate Republicans publicly said the measure was too draconian, and others privately were glad to see the proposal fail.

Stung by that defeat, Short—a former chief of the Koch flagship group Freedom Partners Chamber of Commerce—has sought to build a broader coalition on taxes. One potential land mine: the Koch-backed groups loathe carve-outs in the tax code, and finding a way to address that without spooking the rank-and-file activists will be incredibly difficult.

More than six months into Trump’s first term in office, the White House has yet to land a meaningful legislative accomplishment. To turn that tide, the White House needs to leverage the conservative base of the party that was always an uneasy fit for Trump. After all, the New York real estate developer and a mom-and-pop grocery from Indiana didn’t have much in common.

The deep-pocketed conservative donors, meanwhile, were rightfully apprehensive about how Trump would conduct himself as President. Charles and David Koch, especially, were no fans of Trump or the people around him. Trump returned the favor by calling Koch and their buddies puppeteers who pull politicians’ strings for personal enrichment. In the end, the Koch organizations pretended the presidential race wasn’t taking place and instead focused on down-ballot contests.

This explains why Pence, a favorite of the Koch brothers, is a natural bridge between the White House and this conference of small-government activists later this month. It also helps Pence’s political profile should he seek the Presidency on his own terms, as he’s expected to do one day.

Pence also has been one of the most valuable voices for the White House when dealing with Congress. A former member of the House Leadership team, Pence has deep relationships with its most conservative members and has done a remarkable job of keeping the daily churn of drama coming from the Oval Office away from his team. Pence dutifully pushed for the failed health care proposal, but it was clear to many Republican lawmakers he was doing so out of deference to the President and not out of any strong belief that the plans being considered were the answer.

On taxes, it’s a different story. As Indiana Governor, Pence dramatically cut taxes, including zeroing out inheritance taxes and reducing corporate rates from 7.5% to 4.9%. In his telling, he cut $3.5 billion in taxes. For the conservative activists—and their Koch patrons—that is exactly what they like to hear and what they need to motivate in support of Trump-backed efforts to accomplish similar cuts. 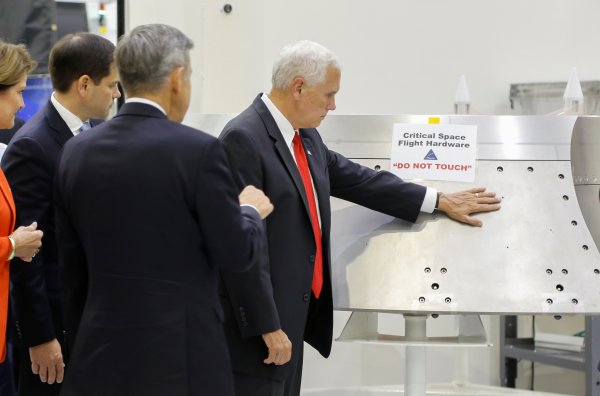 Mike Pence Says He Touched NASA Equipment Because Marco Rubio Dared Him
Next Up: Editor's Pick