Migrants wait to be rescued by the Aquarius rescue ship run by non-governmental organisations (NGO) "SOS Mediterranee" and "Medecins Sans Frontieres" (Doctors Without Borders) in the Mediterranean Sea, 30 nautic miles from the Libyan coast, on August 2, 2017.
Angelos Tzortzinis—AFP/Getty Images
By Tara John

Italy approved a controversial new naval mission to stop migrant smuggling boats from leaving Libya on Wednesday, in an effort to curb the numbers of migrants attempting to cross the Mediterranean.

Italy’s parliament voted to allow a limited naval mission to support Libya’s coastguard in a bid to curb human traffickers, provoking a fierce reaction from the head of rival forces to Libya’s U.N-backed government. General Khalifa Haftar, the rogue general who oversees the eastern part of the country, threatened to repel “any naval vessel that enters national waters without permission from the army.”

This follows an influx of more than 94,000 migrants arriving to Italy’s shores this year, overwhelmingly from North Africa, which according to the International Organisation for Migration (IOM) is slightly higher than the respective totals in 2015 and 2016. The numbers have strained Italy’s network of reception centers and has led to a public backlash, which could fuel populist opposition parties in next year’s general election.

The Italians are joining forces with Libya

“(We will) provide logistical, technical and operational support for Libyan naval vessels, helping them and supporting them in shared and coordinated actions,” Italian Defense Minister Roberta Pinotti said on Tuesday, ahead of the Parliamentary vote the following day.

The Italian naval vessel, the Comandante Borsini, entered Libyan waters within hours of the vote. Another vessel is expected to follow in the coming days, but Libya’s eastern parliament affiliated with the forces of Haftar opposed the decision. It complained that the vote violated the country’s national sovereignty and, according to Arab news network Al Arabiya, Haftar has ordered the bombing of Italian warships. The Italian government called the threat “unrealiable” and “unfounded,” according to the news agency Agenzia Giornalistica Italia.

The Italian government initially hoped to send six ships to Libya’s territorial waters, but plans had to be scaled down following popular protests in Tripoli, Reuters reports. Libyans have reportedly been posting images of Omar al-Mukhtar, a national hero who battled Italian rule in the early 1900s, on social media in response to the Italian presence— reflecting the widespread unease over a former colonial power intervening on domestic affairs. Pinotti said that Italy had no intention of creating a blockade on Libya’s coast.

Italian officials believe that sending the boats back to Libya will act as a deterrent, but rights groups are deeply concerned by the move. Refugees International, which is based in Washington, D.C., says returned migrants face detention and abuse at the hands of traffickers and even the coastguard. “It is no secret that migrants and refugees who are intercepted and returned by the Libyan coast guard face horrific abuses in Libya’s migrant detention centers,” Izza Leghtas, senior advocate for Europe at Refugees International, said in a statement. “By engaging in these operations, the Italian government would be knowingly complicit in these abuses.”

The Italian battle with aid groups is escalating

Many Italian lawmakers have suggested NGOs which patrol the seas to pick up migrants act as a virtual invitation to make the journey. Luigi di Maio, from the populist 5 Star Movement, likened aid-group’s rescue ships to a migrant “sea taxi” around the same time in April when a Sicilian court suggested NGO’s colluded with Libyan smugglers. It’s a claim NGOs vehemently deny.

In July, Italy’s center-left government threatened to close its ports to NGO’s operating rescue boats that did not sign a “code of conduct.” The seized ship, the Iuventa, is operated by German aid group Jugend Rettet, which is among six out of the nine aid groups operating search-and-rescue activities off Libyan waters to have refused to sign up to the code-of-conduct.

More than 2,200 people have been recorded as dead or missing this year. Aid groups say they are only fulfilling their humanitarian duty to save lives. Ambrogio Cartosio, chief prosecutor in the Sicilian city of Trapani, told reporters on Wednesday that no one has yet been charged and the investigation the German NGO was ongoing. “The evidence is serious,” he said, Reuters reports. “We have evidence of encounters between traffickers, who escorted illegal immigrants to the Iuventa, and members of the boat’s crew.”

Numbers of migrants are rising

The IOM says that the number of asylum seekers entering Europe by sea in 2017 (through to July 30) is around 100,000 less than the same period the year before. Italy, however, receives the majority of migrants arriving in Europe due to traffic through the Central Mediterranean route from Libya to Italy’s southern coast. The route has been dubbed the “deadliest” in the world by Amnesty International due to the thousands of people recorded as dead or missing in the attempt to cross the sea in flimsy rubber dinghies or rickety wooden vessels.

Italy’s migration crisis is further compounded by its neighbors, like Switzerland, Austria and France, tightening their border controls in a bid to prevent migrants crossing the Alps. Italy, which was once a point of transit for migrants moving up to northern Europe, has become a place of settlement. 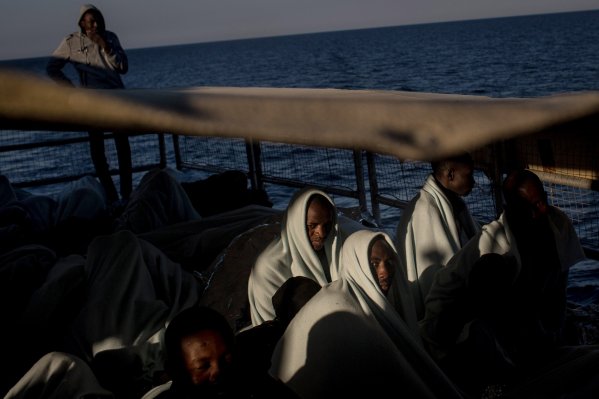 Italy Pleads Europe for Help Amid Record Influx of Refugees
Next Up: Editor's Pick