The history of the Statue of Liberty became the focus of a back-and-forth between Stephen Miller, an aide to President Donald Trump, and CNN’s Jim Acosta during the White House Press Briefing on Wednesday.

The broadcast journalist had argued that the President’s support of a bill that would place new limits on legal immigration did not jibe with the spirit embodied by the monument, as expressed by the Emma Lazarus poem that has become synonymous with Lady Liberty: “Give me your tired, your poor,” it famously declares, “Your huddled masses yearning to breathe free.”

“The poem that you’re referring to was added later,” Miller replied. “It’s not actually part of the original Statue of Liberty.”

The poem was engraved onto a plaque placed on the pedestal in 1903 — nearly two decades after the statue was unveiled — and that the monument wasn’t always associated with immigration.

Originally, the meaning of the monument had more to do with the abolition of slavery than with immigration. In the 1860s, French anti-slavery activist Edouard de Laboulaye had first proposed that France should make a gift of the statue, dubbed “Liberty Enlightening the World” and designed by sculptor Frédéric Auguste Bartholdi, both to commemorate the alliance between the U.S. and France during the American Revolution and the end of slavery in the U.S. after the Civil War, according to the National Park Service.

But, while the statue herself would be a gift, it would be up to Americans to raise money to construct the monument’s base. Many years passed during this period, and in that time the main liberty-related questions on Americans’ minds — especially in New York City — evolved. The Civil War had ended, but a “Great Wave of Immigration” had begun, as 23.5 million persons immigrated between 1880 and 1920.

It was as a result of the need to fund the pedestal that Emma Lazarus was tapped to write the famous sonnet “The New Colossus” for a Statue of Liberty fundraiser in 1883. Inspired by her work with Russian Jews detained by immigration officials on Ward Island, she included a new facet of liberty in her interpretation of what the statue could mean.

Word about the poem got out, and it was reprinted in newspapers Joseph Pulitzer’s New York World and in the New York Times. It became even more popular more than a decade after Lazarus’ 1887 death, when her friend Georgina Schuyler happened upon a copy of the poem in 1901 and was moved to bring it new attention. She started a campaign to raise awareness of the poem timeliness. Its text was added to Lady Liberty’s pedestal two years later, as the wave of immigration continued.

In the years since, though the statue would take on many additional layers of meaning, the link between it and immigration would solidify, with many recognizing that — even if Laboulaye had had something else in mind — Lady Liberty and Emma Lazarus were important parts of the history of immigration in the U.S. For example, when President Lyndon B. Johnson signed the Immigration and Nationality Act of 1965, it was in a ceremony on Liberty Island.

As Esther Schor, who wrote a biography on the author, said in 2011, “Emma Lazarus was the first American to make any sense of this statue.” 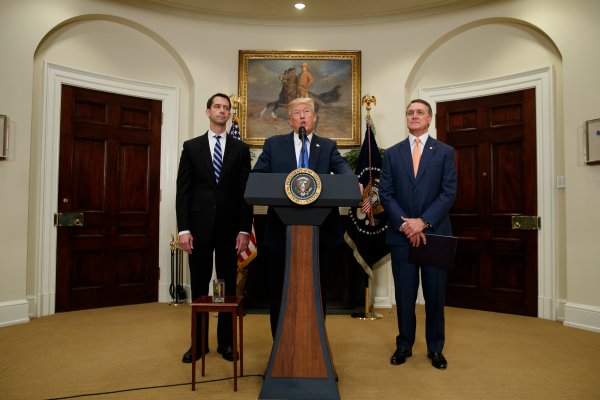 Trump Backs Bill to Cut Legal Immigration in Half
Next Up: Editor's Pick