Republican president-elect Donald Trump delivers his acceptance speech during his election night event at the New York Hilton Midtown in the early morning hours of November 9, 2016 in New York City.
Chip Somodevilla—Getty Images
Ideas
By Jeff Flake
Flake is a Republican Senator for Arizona in the U.S. Congress and the author of Conscience of a Conservative.

Never has a party so quickly or easily abandoned its core principles as my party did in the course of the 2016 campaign. And when you suddenly decide that you don’t believe what had recently been your most deeply held beliefs, then you open yourself to believing anything — or maybe nothing at all. Following the lead of a candidate who had a special skill for identifying problems, if not for solving them, we lurched like a tranquilized elephant from a broad consensus on economic philosophy and free trade that had held for generations to an incoherent and often untrue mash of back-of-the-envelope populist slogans. Seemingly overnight.

Seemingly overnight, we became willing to roll back the ideas on the global economy that have given America the highest standard of living in history and lifted hundreds of millions of others from poverty all over the world.

Seemingly overnight, we became willing to jettison the strategic alliances that have spared us global conflict since World War II.

Seemingly overnight, we gave in to powerful nativist impulses that have arisen in the face of fear and insecurity over the swiftly evolving global economy.

Seemingly overnight, the word globalist became a grave insult among people in my party who also called themselves “conservative.” I remember a right-wing blog post during my election to the Senate that said that I had “been seen in the company of globalists in Paris, France.” Quel scandale! Globalist as opposed to what, exactly? A provincialist? A parochialist? A localist? In this country, we are less than 5 percent of the world’s population. We are 20 percent of the world’s economic output. And if we don’t trade, we don’t grow. Given the alternatives, I’ll take the globalist moniker, thank you.

Seemingly overnight, we became defined not by the limitless aspirations of a free people but by our grievances and resentments and our lowest common denominators. Rather than leaning in to the economy of the future, this nativist vision would have us clambering to reclaim an economy of the past — an economy, by the way, that even if it were possible to somehow reconstitute would make no sense in the twenty-first century.

Why did we do that? And how did it happen? How did conservatives betray conservatism? Or worse: How did we embrace incoherence?

It will likely take historians decades to figure out why, exactly, but political expediency and self-justification are time-honored traditions in politics, and they offer a good place to start any serious historical analysis of this particular conservative crack-up.

The quick answer: We did it because it was cheap and easy and the real world is hard and defending a principled position to voters is harder still.

In every political movement there is always evolution and drift. And there are also inflection points — the hinges of history, when big changes happen — political realignments, resource conflicts, civil rights struggles, industrial and technological revolutions, waves of global economic connectivity and upheaval.

All of these forces can set parties floating like continents away from or into each other — tearing them apart or forming new ones. Over the past century, we have even seen our two major parties reverse roles on some of the biggest issues America has ever faced.

But those transformations were gradual, organic to other tectonic social changes taking place at the time, and took decades, even generations, to play out.

During the campaign of 2016, on the other hand, committed lifelong free-market conservatives, with their fingers to the wind, took no time at all to dispense with principle and be r born as “fair traders” or “populists.” All in an effort to chase our own pied piper, who admittedly seemed expert at mapping the nation’s anxieties. Adapting the happy talk of a charismatic outsider was a lot easier than explaining, defending and persuading voters of the things we actually believed.

Conservatives love to mock liberals for offering “free stuff” from the government, but what was our 2016 campaign if not that?

In politics, it is difficult to win an argument with complexity and facts when the other side offers easy answers and free stuff without worrying about the details. This is largely how Donald Trump vanquished the Republican field in 2016. A tone that many of his supporters took for candor — Our leaders are so stupid! I alone can fix it! — combined with easy answers to hard questions, sweetened by free stuff. Candidate Trump was giving — and we, the Republican electorate, bought — the late-night infomercial: “Health Care for Everybody! Much Better, at a Fraction of the Cost! Free Border Wall! Super-Colossal Trade Deals! But Wait! There’s More!!”

Free, yes. But also free of significant thought. The explanation for how the party of free trade went along with a candidate who came out against free trade — alternately describing himself as a free trader and a fair trader, eager for trade wars, threatening tariffs, calling for border taxes and coming out against most multilateral trade agreements ever negotiated — is quite simple: We conservatives too often didn’t have the courage of our convictions. Call us willing accomplices. The instant a flashy new novelty act came along, shredding conservative orthodoxy in the name of “telling it like it is,” we bailed. The specter of winning arguments in the public sphere on the strength of our ideas proved too daunting.

Excerpted from Conscience of a Conservative by Jeff Flake. Copyright © 2017 by Jeff Flake. Excerpted by permission of Random House. All rights reserved. No part of this excerpt may be reproduced or reprinted without permission in writing from the publisher. 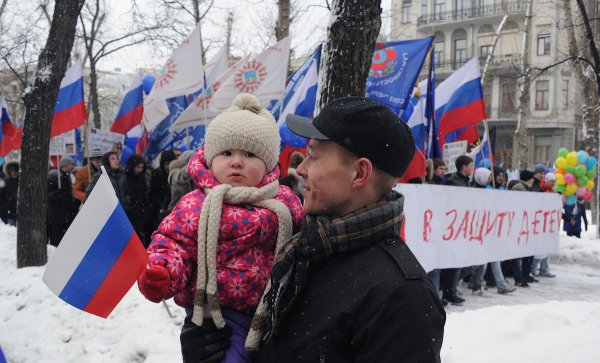 How Russian Adoptions Became a Controversial Topic
Next Up: Editor's Pick