What Adam and Eve Can Teach Us About Love

Adam and Eve committing original sin, detail from The Virgin of Victory, 1496, by Andrea Mantegna (1431-1506), tempera on canvas, 280x166 cm.
Getty Images
Ideas
By Bruce Feiler
Bruce Feiler is the author of six bestseller, including Walking the Bible. This piece is adapted from his latest book, The First Love Story: Adam, Eve, and Us.

In a groundbreaking address to the American Psychological Association in 1998, Martin Seligman called for the creation of “positive psychology,” a reoriented science that focused less on individual’s defects and more on their successful qualities — optimism, hardiness and the capacity for growth. The explosion of research into happiness and mindfulness that followed brought renewed attention to timeless thinkers like Confucius, Mencius and Marcus Aurelius.

But even this welcome attention to the past missed what may be the signature example of positive psychology in the ancient world. Adam and Eve are near-perfect role models for the healthy, resilient, loving relationship we all say we crave.

I spent the last few years traveling in the footsteps of history’s first couple, from the Garden of Eden in Iraq to the Sistine Chapel to Mae West’s Hollywood, trying to figure out what the first relationships can teach us about relationships today.

What I found is that Adam and Eve introduced the idea of love into the West. They were the first to grapple — sometimes successfully, other times not — with the central mystery of being alive: being un-alone.

Yet instead of celebrating this achievement, history has blamed them for bringing sin, lust, even death into the world. This is the greatest character assassination ever.

More important, it’s allowed us to overlook that the earliest figures to grapple with a long-term relationship embody the exact qualities that the latest research suggests we all need to follow. So what can Adam and Eve teach us about love?

1. The Power of Connectivity.

A seminal findings of positive psychology is that relationship are central to well-being. George Valliant, who ran the famed Grant Study of 268 men at Harvard, said the 75 years and $20 million expended point to “a straightforward five-word conclusion: ‘Happiness is love. Full stop.’”

At the same time, the biggest threat to happiness is feeling isolated, left out, alone. Those with higher rates of loneliness have higher rates of depression, anxiety, and hostility, along with increased rates of dying from heart disease, cancer, and every other cause of death studied. Social isolation is on par with high blood pressure, obesity, lack of exercise, and smoking as a risk factor for illness and early death.

Why? John Cacioppo of the University of Chicago has shown that being lonely triggers cellular changes in the body that make the immune system less able to protect vital organs.

The first thing God says about human beings in the Bible, after creating Adam, is “It’s not right for humans to be alone.” Hebrew Scripture got there 3,000 years before modern science. From Eve’s risky reach for knowledge to the unbearable pain of losing a child at the hand of another, the first couple are constantly wrestling with loneliness.

God clearly wants them to find refuge in each other. The aching question: Can they find a way?

2. The Need for Autonomy.

Another pillar of psychology is that being emotionally healthy requires a high degree of self-directedness. Edward Deci, of the University of Rochester and the founder of this line of thinking, told me that hundreds of studies across culture, gender and age have shown that people prefer being motivated from within and need to feel autonomous.

This, too, is a major theme of Adam and Eve. The two begin life crazy for each other. Eve is “the one,” Adam enthuses. But Eve craves independence, wanders off and eats the fruit. Since the text says she gains knowledge with this act, Deci thinks she’s seeking more meaning. “For Eve, eating the fruit appears to be an autonomous choice.”

The same applies to Adam, who given the option to eat, chooses companionship over duty. “He makes the autonomous decision to be with Eve,” Deci said.

Only when Adam and Eve face death alone can they face life together. “Learning to be oneself,” wrote Thomas Merton, “means learning to die in order to live.” Only when they fall from grace can they fully fall in love with each other.

The great Swiss child psychologist Piaget coined the phrase “collective monologue” to describe how preschoolers play, meaning they gather together but talk only to themselves. Love is the opposite of this. It’s “collective dialogue.” Two voices construct a shared story.

Creating this shared story — what psychologists call “co-narration” — is the last great quality of romantic love, and the one Adam and Eve are most responsible for introducing. From the moment God divides them in two, they alone are responsible for writing their own narrative. Theirs is the first joint byline.

This need to author your own intermingled experience is the final lesson from the oldest couple: Love is a story we tell with another person. It’s co-creation through co-narration.

And it’s a reminder that sometimes the timeliest wisdom comes from timeless sources. Adam and Eve are the first love story. The story we need today. 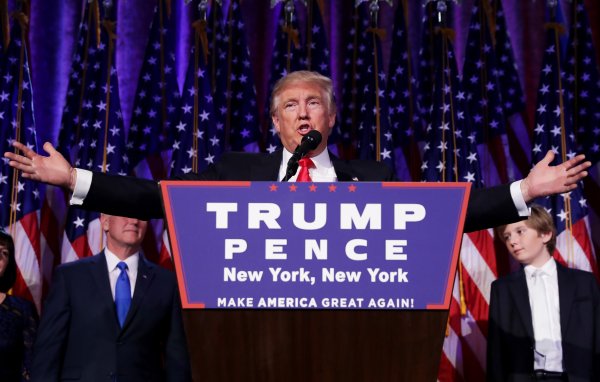 Republicans Are ‘Willing Accomplices’ in Betraying American Ideals
Next Up: Editor's Pick