Christopher Wray testifies on his nomination to be Director of the FBI before the U.S. Senate Committee on the Judiciary in Washington, D.C. on July 12, 2017.
Ron Sachs—picture-alliance/dpa/AP Images
By Melissa Chan

The U.S. has launched another intercontinental ballistic missile — its fourth this year — amid rising tensions with North Korea, which is also testing such missiles. Meanwhile, Secretary of State Rex Tillerson said the U.S. is not trying to “collapse” the North Korean government, but is instead hoping to “have a dialogue” with Pyongyang at some point.

The Senate has confirmed Christopher Wray to be the new director of the FBI. Wray, who is replacing James Comey, said he would do his job independent of politics. “My loyalty is to the Constitution and the rule of law. Those have been my guideposts throughout my career, and I will continue to adhere to them no matter the test,” he said.

NASA is looking to bring on board a planetary protection officer, who will make sure U.S. space missions don’t end up accidentally contaminating an alien world or other planets with Earth’s particles. The new full-time employee would be paid up to $187,000 a year.

The White House said President Donald Trump weighed in on his son’s statement “as any father would.”

In a new lawsuit, Fox News is accused of coordinating with the Trump administration to push a false story.

An Arizona woman, who left her child in a desert to die, has been sentenced to 20 years in prison. 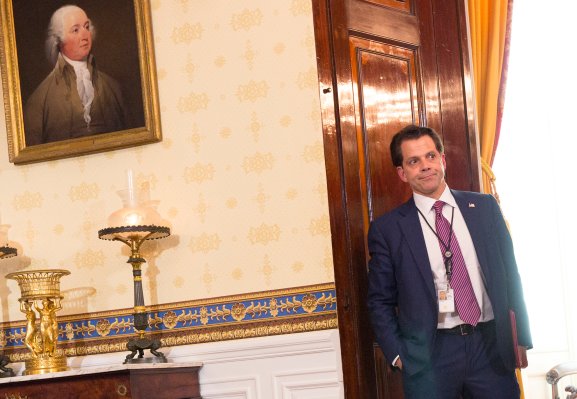 The Morning Brief: Anthony Scaramucci, Venezuela and the Los Angeles Olympics
Next Up: Editor's Pick