U.S. Scientists Use CRISPR to Fix Genetic Disease in Human Embryos For the First Time

Scientists have successfully used CRISPR, a tool that cuts DNA with more precision than any other genome editing technology, to fix a genetic defect in human embryos that can cause serious heart problems, according to a landmark new study in the journal Nature. This is the first use of CRISPR on human embryos in the U.S.

Chinese scientists have reported using CRISPR to correct genetic defects in human embryos, but some of the embryos they used weren’t viable.

Shoukhrat Mitalipov, from Oregon Health & Science University, collaborated with researchers at the Salk Institute, as well as with scientists from China and South Korea, to improve on those results. They applied CRISPR at the earliest stage possible—when the embryo is still a single cell—to ensure that the genetic changes they introduced were propagated to every cell of the embryo as it divided and developed. Because the embryos were created for research purposes only, none were allowed to develop beyond three days.

CRISPR, which was introduced in 2012, precisely cuts DNA but does not repair it. If combined with other techniques, however, researchers say it could both cut out disease-causing genes and replace them with healthy versions to essentially cure genetic human diseases. So in order to further the science, Mitalipov and his colleagues wanted to test what happened when CRISPR was used in a human embryo. Theoretically, once CRISPR broke the DNA in the appropriate place to cut out a mutation, the cell’s natural repair mechanisms would kick in to repair the injury, fixing the defect this time with the proper code—much like how a word processor’s autocorrect function fixes spelling mistakes.

Unfortunately, this process isn’t very efficient in adult cells in which CRISPR has been tested, so Mitalipov expected similarly low yields in the embryos.

To his surprise, however, he found that embryos were very effective at fixing breaks in DNA.

He created embryos that contained a specific defect known to cause a heart condition by fertilizing healthy donor eggs from various women with sperm from a man who carried the genetic mutation for the disease. He then introduced CRISPR to splice out the mutated gene in more than 50 embryos just after the sperm fertilized the eggs, when the embryos were still just one cell. Several days later, 72% of the embryos showed no sign of the mutated gene; the gene was essentially corrected in all of their cells.

MORE: How the Science of CRISPR Can Change Your Genes

It turns out that the embryo relies on the normal copy of the gene, in this case from the egg, to fix the break made when CRISPR cut out the mutated gene. They key was to introduce CRISPR early enough so the embryo’s own DNA repair system could fix the mutated gene. That’s encouraging for one potential use of CRISPR in the future as a way to correct inherited genetic disease, says Mitalipov, since the embryo seems to have a built-in, reliable way of repairing the injury caused by splicing out an abnormal gene.

“Genetic diseases that are heritable can be treated this way as early as possible,” he says. “It’s the best way to treat the disease before the genetic mutation is actually transmitted to the embryo.”

Currently, the most reliable way of screening for such inherited defects is by using IVF, screening the resulting embryos for the mutation and transferring only those without the mutation for pregnancy. But that may require several cycles of IVF, which is expensive and carries with it side effects and complications, before enough genetically healthy embryos are created.

The study results don’t mean that editing human embryos to correct genetic diseases will be available at hospitals anytime soon. While that’s the goal, the findings are just the first in a series of studies that will need to be done to document the safety and reliability of using CRISPR to fix human disease. For one, the efficiency of the CRISPR and repair process is still about 70%. “There is still work to do to improve the efficiency,” says Mitalopov. “But I think that’s possible to do.”

MORE: HIV Genes Have Been Cut Out of Live Animals Using CRISPR

He’s also encouraged by the fact that the gene editing and repair did not introduce other errors in the DNA. While it’s the most accurate DNA editor available, one of CRISPR’s drawbacks is that it can cut the genome in unintended places, especially where letters in the code look very similar to the target (again, similar to the way autocorrect can sometimes introduce more errors in attempting to fix a misspelling). Mitalipov’s team found no such off-target effects, a sign that CRISPR editing, at least in this study, was relatively safe. He notes, however, that may simply be an artifact of the particular gene he targeted; there may be coincidentally no parts of the genome that have similar sequences as the gene that CRISPR cut.

Even beyond the medical questions, there are also ethical concerns about the power inherent in manipulating the human genome. While correcting devastating diseases such as the heart condition Mitalipov studied, which can cause sudden death in young people, isn’t ethically controversial, using CRISPR to modify other genes—for intelligence, say, or athleticism or physical attributes like eye color or height—is much more problematic. The concerns are especially acute when it comes to eggs, sperm and embryos, since changes in these can be passed down to the next generation and forever change the human gene pool. The embryos that Mitalipov created were never intended to be transferred for pregnancy. But had they been allowed to develop, they would not contain the heart disease mutation, and they would not pass on the mutation to their offspring. The CRISPR editing would essentially eliminate the mutation from that family’s pedigree. Editing changes in already developed cells in adults aren’t inherited, so are less worrisome in terms of their legacy.

MORE: Pandora’s Baby: How A New Type Of Prenatal Genetic Testing Could Predict Your Child

For now, there are legal and regulatory hurdles to moving the research closer to human trials. The National Institutes of Health (NIH) does not provide funding for using CRISPR in human embryo research. The Food and Drug Administration is banned from considering studies that involve genetic altering of human eggs, sperm or embryos. Mitalipov and his team used funding from Oregon Health & Science and did not rely on any NIH support. 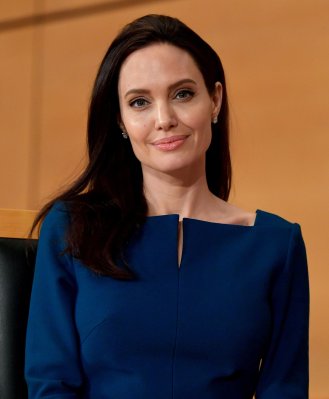 Angelina Jolie Was Diagnosed With Bell’s Palsy—Here’s What You Need to Know About It
Next Up: Editor's Pick