It might be the off-season for the NBA, but that doesn’t mean that the action has stopped off the court for Cleveland Cavaliers players LeBron James and Kyrie Irving, the latter of whom has been the subject of trade rumors.

This weekend while he attended Dallas Mavericks’ player Harrison Barnes’ wedding, he was filmed encouraging Steph Curry on the dance floor as Steph seemingly mocked an Instagram video that LeBron James posted of himself dancing during a workout. Either that, or he was having a little fun with the news.

Here’s Steph dancing at the wedding with James’ signature fierce moves while Kyrie eggs him on.

And here’s the original video from LeBron James; the two videos share striking similarities with both men flexing to “First Day Out” by Tee Grizzley.

While some lighthearted fun at a wedding might seem innocuous, it’s important to remember a couple things: first, Steph’s Golden State Warriors have defeated the Cleveland Cavaliers twice in the past three years in the NBA Finals; second, the video that Steph was seemingly making fun of was a video that LeBron posted three days after the Cavs lost the 2017 Finals along with the hashtag #IHearEmPrayingOnMyDownfall, a line in Tee Grizzley’s track, but also something that someone might feel after they’ve lost a championship.

Luckily for Steph Curry, who also trolled LeBron by literally ripping a pair of the player’s shoes off a fan’s feet earlier this summer, it’s a well-acknowledged fact that LeBron is a master troller himself who’s led the charge on many a petty prank directed at the Warriors and specifically at Curry in the past. How he feels about Kyrie’s co-sign of Steph’s parody, however, is yet to be seen, but in Kyrie’s defense, there’s probably no more satisfying way to troll LeBron than by egging on his arch-rival as he pokes some fun at King James.

What a time to be alive. 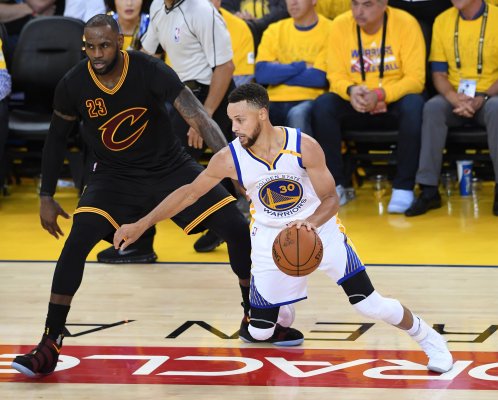 Watch Steph Curry Rip LeBron James Shoes Off a Fan's Feet for a Hilarious Reason
Next Up: Editor's Pick