This Thursday and Friday have scored a place in the health-care history books, thanks to the U.S. Senate’s middle-of-the-night vote rejecting a bill that would have repealed part of a landmark achievement of the Obama presidency, the Affordable Care Act. Had the repeal passed, even in its “skinny” form, it could have led to changes to Medicaid and Medicare.

But the dates in which the so-called “vote-a-rama” happened — July 27 and July 28 — are already in the history books for another reason. Those were the days in 1965 on which the House and Senate, respectively, approved an amendment to the Social Security Act that would create those two very programs.

Former Rep. John Dingell (D-MI) was one of several members of Congress who pointed out the anniversary of this milestone in the history of health care in American history.

The House and Senate approved a version of the program that had come out of a conference committee, convened when differences between bills passed by the two chambers needed to be reconciled. As the Senate Historical Office describes, the final bill “offered a ‘three layer cake’ of coverage: hospital insurance for the aged, physicians’ insurance for the elderly, and expanded federal assistance to supplement state medical payments for the poor.”

And while the 2017 vote was notable for the three Republicans who voted with Democrats — Maine’s Susan Collins, Alaska’s Lisa Murkowski and Arizona’s John McCain — the 1965 moment boasted more support from members on both sides of the aisle. As Politifact points out, the bill had relatively bipartisan support, passing by 307-116 in the House and 70-24 in the Senate (including 70 and 13 Republican votes in each house, respectively). The now-retired Senate historian Donald Ritchie explained to the fact-checking website that votes back then tended to have more bipartisan support in general, because at the time each of the parties had its own groups of conservative and liberal members, and “the conservatives in the two parties voted against the liberals in each party.”

But the date wasn’t the only link between this week’s vote and that of 52 years ago.

Some of the most striking moments in the Senate’s 2017 “vote-a-rama” — the impassioned plea from Democrat Mazie Hirono, who has kidney cancer, and the vote cast by McCain, who was recently diagnosed with brain cancer — are arguably reminiscent of the actions of the Senator some call the “father of Medicare,” New Mexico’s Clinton P. Anderson.

The personal health circumstances of those two Senators have been impossible to ignore as they made decisions that would affect the nation’s health care, and Anderson’s own frequent ill health was likewise a factor in the development of Medicare. In fact, President Kennedy had asked him to take on the cause of Medicare specifically because he thought that, “Perhaps a man who has spent much of his life fighting off the effects of illness acquires . . . an understanding of the importance of professional health care to all people.” At one point in the mid-1960s, Anderson had even negotiated parts of a Senate bill from his hospital bed at Walter Reed, according to the Senate Historical Office.

When LBJ signed the bill in Independence, Mo., on July 30, 1965, he specifically requested the attendance of Anderson as one of the bill’s principal sponsors. 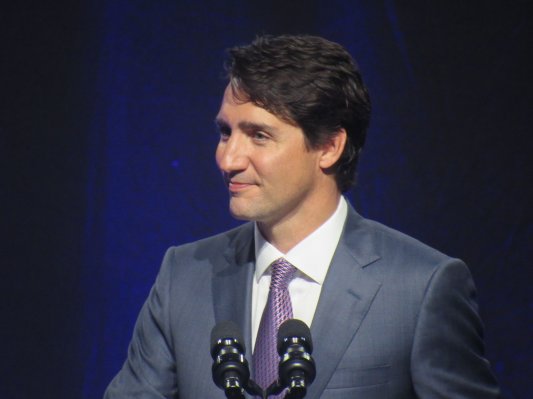 Justin Trudeau Discusses Channeling the Fake President From The West Wing
Next Up: Editor's Pick