John McCain on His 'Skinny Repeal' Vote: We Must Do the Work Our Citizens Deserve

The so-called “skinny repeal” of Obamacare went down in flames early Friday after three Republicans—Sens. John McCain of Arizona, Lisa Murkowski of Alaska, and Susan Collins of Maine—joined with all 48 Democrats in voting against the measure. McCain’s vote was arguably the most dramatic, given that he returned to the Senate for votes this week after being diagnosed with brain cancer.

In a statement issued after the vote, McCain said he decided to vote against the repeal because it would not lower costs, increase competition or improve Americans’ health care. “While the amendment would have repealed some of Obamacare’s most burdensome regulations, it offered no replacement to actually reform our health care system and deliver affordable, quality health care to our citizens,” he said.

McCain also said he had not been reassured by House Speaker Paul Ryan’s statement that the House would be willing to work with Senators on crafting a repeal they could all agree on after members of the upper chamber made clear they were using the skinny repeal to try to keep the Obamacare repeal alive—but didn’t want that measure to become law. “The Speaker’s statement that the House would be ‘willing’ to go to conference does not ease my concern that this shell of a bill could be taken up and passed at any time,” McCain continued.

Ultimately, McCain said, he did not want Republicans to rush the repeal through the Congress without bipartisan support as he said Democrats had done with the Affordable Care Act. Instead, the Republican Senator said, the Congress should “return to the correct way of legislating” and hold hearings, get bipartisan input, and take the advice of governors across the country.

McCain had expressed similar discomfort with the process in a speech from the Senate floor earlier this week, which he delivered after voting for the motion to proceed.

“We should not make the mistakes of the past that has led to Obamacare’s collapse,” McCain said Friday. “We must do the hard work our citizens expect of us and deserve.” 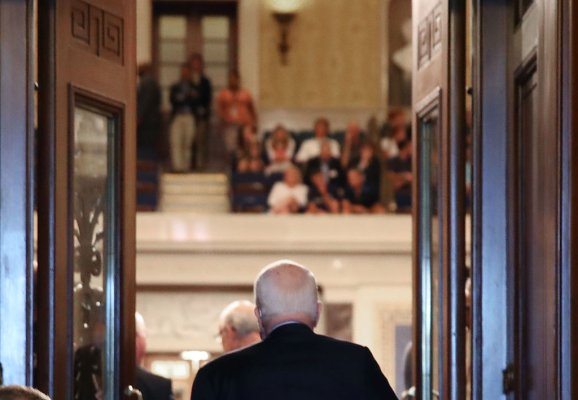