5 Tips for Sounding More Professional On Email and Slack

The rise of workplace chat apps like Slack means there could be fewer meetings clogging up your afternoons in the office. But when communicating with colleagues virtually, it’s more important than ever to choose your words wisely.

“We know that 55% of the message we convey is all about how we do it: our voice, our tone,” says Lena Koropey, founder of etiquette consulting firm Gramercy Protocol. “Only 7% is the message itself.”

How can you best communicate with your coworkers over chat or email? Check out these tips.

Get to the point

Whether you’re posting in a Slack channel or preparing to send a team-wide email, being succinct is important. For emails, that means starting with a clear and accurate subject line. It’s also a good idea to update the subject as the topic evolves if you’re dealing with a long email thread. “Keep it as brief as possible and be respectful,” says Koropey.

Paying attention to the conversation is also crucial to cutting down on inbox clutter. “You don’t want to be redundant,” says Diane Gottsman, founder of the Protocol School of Texas. “You want to be focused. You don’t want to ask the same question over and over again in a different way.”

Don’t use chat or email to address an important issue

Chatrooms and emails can be great for tasks like scheduling meetings, doling out assignments, and keeping colleagues up to date. But when it comes to discussing a complex problem, especially with a subordinate’s performance, it’s best handled in person or over the phone. “The more human that you can be in that interaction, the better the outcome,” says Koropey.

Avoid using these words and phrases

When discussing sensitive subjects, be it digitally or verbally, you’ll want to cut these words and phrases from your vocabulary. Use “I” instead of “you” when providing feedback and pointing to a colleague’s specific behavior. Bring up your concern with a line such as: “My concern is…” rather than “You messed up,” says Gottsman.

“Using the word ‘but’ negates everything prior,” says Koropey. Phrases like “Don’t take this the wrong way,” and “It’s not personal” harm more than help, she says.

Be aware of the tone in your office

Chatting with a coworker in Slack can feel as casual as pinging a friend on Facebook Messenger. But it’s important to keep conversations professional, both in chat and in email. Grammar and spelling are just as important in brief conversations, even if you’re writing informally, says Koropey: “All of these details make a big impression about who we are.”

That pertains not only to how you communicate, but what you’re saying, too. Although it can be tempting to sway the conversation in a spontaneous direction, you can risk wasting your colleague’s time by doing so. “Stay focused on what the message is,” says Gottsman. “If it’s business, you keep it business-related.”

If there’s a pressing issue to discuss and a remote worker isn’t answering his or her messages or emails, try contacting them through a different medium. How you approach the situation should depend on how urgent the issue is. Koropey says that if a person still hasn’t answered their messages after about two hours, it’s appropriate to try calling them if it’s a time-sensitive matter.

But a 24-hour period is reasonable amount of time to give for projects that are less urgent, she says. “People are overwhelmed because they’re on multiple websites, getting bombarded at times,” says Koropey. “That’s why we want to be mindful of what we share, how many people we reply to, and just be considerate with [our] communication.” 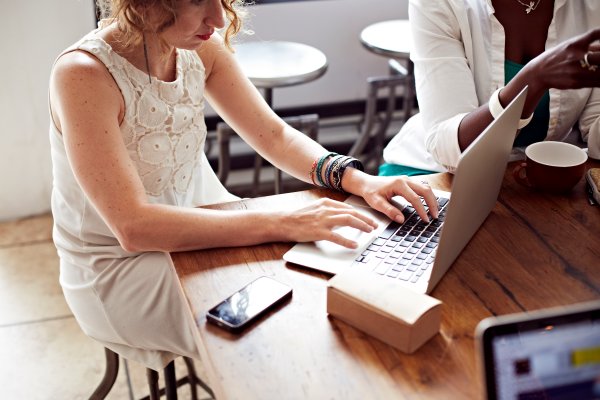 5 Easy Tech Tricks to Make You More Productive
Next Up: Editor's Pick