9 Things Every Woman Should Know About Her Fertility

Whether or not you want babies, your fertility can be a window into your overall health. Here’s a puberty-to-menopause handbook covering the facts of life every woman needs to know.

Watch the video: 5 Things to Know About Your Fertility

We spend a large part of our lives either trying to get pregnant or trying not to get pregnant. But fertility is about far more than sperm meeting egg. The female reproductive system involves not just your lady parts but also your brain, your love handles, and so much more, including a delicate balance of hormones that affect you from head to toe. Use this holistic guide to learn more about the link between your overall health and monthly cycle.

Here’s a close-up look at the first half of your menstrual cycle.

Days 1-5: Triggered by dropping levels of estrogen and progesterone at the end of the previous cycle, uterine tissue breaks down and is shed during your period. Bleeding lasts about five days.

Day 7: By this point, several fluid-filled follicles, each containing an egg, have developed on the ovaries, spurred by the hormone FSH.

Days 7-14: One of those follicles will reach maturity as estrogen levels begin to rise again, causing the uterine lining to start to rethicken.

Day 14, ovulation day: The mature follicle bursts to release an egg. Next steps: uniting with a sperm in the fallopian tube, then implanting in the nutrient-rich uterine wall.

Your period hints at your fertility

There’s no crystal ball to predict your baby-making prospects. But your monthly cycle can offer some clues: “If it’s longer than 25 to 30 days, that could be a sign you’re not ovulating regularly,” says Fahimeh Sasan, DO, assistant professor of obstetrics, gynecology and reproductive science at the Icahn School of Medicine at Mount Sinai in New York City. Short menstrual cycles are a red flag, too. A 2011 study found that women whose cycles lasted fewer than 25 days were 36 percent less likely to conceive than women whose cycles were 27 to 29 days long. Periods that come too close together could also indicate a structural problem (such as uterine fibroids or polyps), which can affect an egg’s ability to implant. And if you’re in your mid- to late 30s, irregular periods could be a sign of perimenopause.

Your weight needs to be just right

About 12 percent of infertility cases are related to the number on the scale. Why? Since your body fat produces estrogen, too much weight (and too much estrogen) or not enough weight (and too little estrogen) can interfere with normal ovulation, explains fertility specialist Alan B. Copperman, MD, of The Mount Sinai Hospital.

Exercise also has an impact

The Goldilocks principle applies to workouts, too: Research has shown that moderate activity (think brisk walking) is associated with better fertility. Intense sweat sessions, not so much. A 2012 Boston University study found that normal-weight women who did vigorous exercise (such as running or aerobics) for five hours a week were on average 42 percent less likely to get pregnant than those who didn’t. “If you’re working out strenuously, your body interprets the activity as severe stress or energy deficiency and shuts reproductive function down,” says David Adamson, MD, chief medical officer of ARC Fertility in Saratoga, Calif. But once you stop, say, scaling mountains, your fertility should recover.

Related: 16 Things You Must Know About Sex After Pregnancy

Taking the pill may preserve your eggs

Not only do oral contraceptives not harm a woman’s fertility, but sustained use might provide a fertility benefit, suggests a 2013 Boston University study. While the data showed a lag in the return to peak fertility for women stopping the pill, the delay lasted only for two to three cycles. What’s more, women who took the pill for longer than four years had a higher likelihood of getting pregnant than women who took it for less than two years. “The pill prevents ovulation, which may help preserve some of your egg supply,” explains study co-author Elizabeth Hatch, PhD, professor of epidemiology at Boston University School of Public Health. More research is needed to determine whether the pill is truly a fertility saver, but for the time being, this may be one more reason to love your birth control.

If you’re trying to get pregnant, get these essential checkups

Ready to start trying for a baby? Pencil these in.

See your gyno for an STD screening. Gonorrhea and chlamydia can lead to pelvic inflammatory disease, which can block the fallopian tubes. Bring up any cycle irregularities, too.

See your internist for a physical, and make sure that she checks your thyroid levels: both hypo- and hyperthyroidism have been linked to infertility, explains Dr. Adimoolam.

See your dentist for an exam and cleaning. Studies show that women with gum disease take longer to conceive. One theory: Gum disease raises inflammation throughout the body.

You still need birth control in your 40s

Even if you’ve got barely-there periods and think you’re perimenopausal, you can still conceive: “I see this happen often: A woman is over 40, goes a few months without her period, stops using birth control and then, whoops, she’s pregnant,” says Shannon Clark, MD, associate professor of obstetrics and gynecology at the University of Texas-Galveston. Other 40-something patients think they can rely on calendar-based contraception, she says. “But since ovulation becomes irregular during this decade, it’s much harder to predict.” The takeaway: Talk to your doc about when it’s safe to stop birth control. Since hormonal contraceptives create artificial periods, it can be tough to know when you’ve hit menopause. To check, your MD may take you off the pill for a few months and test your hormone levels.

If your mom went through menopause early or late, chances are you will, too, says James Grifo, MD, director of the Fertility Center at NYU Langone Medical Center. Indeed, a 2013 Danish study found that levels of AMH declined faster in women whose mothers reached menopause before age 45 than in women whose moms didn’t hit menopause until after 55. Overall fertility may be linked to genes as well: Some related conditions (such as fibroids and endometriosis) can be inherited.

If you’re struggling to conceive, take these tests

If you’ve been trying to get pregnant for a while (a year for women under 35, six months for women over 35), you should see a specialist, says Dr. Grifo. Along with a semen analysis for your partner, expect the following:

Hysterosalpingogram: In this X-ray procedure, an iodine-containing liquid is injected into your uterus via a catheter inserted into your cervix (fun!). It reveals whether your fallopian tubes are open and the shape of your uterus is normal.

Transvaginal ultrasound: The images allow your doctor to count your active follicles and check for abnormalities like fibroids and ovarian cysts.

Blood tests: Levels of anti-Mullerian hormone (AMH) and FSH can determine whether you have a decent egg supply; levels of other hormones can help your MD diagnose disorders. 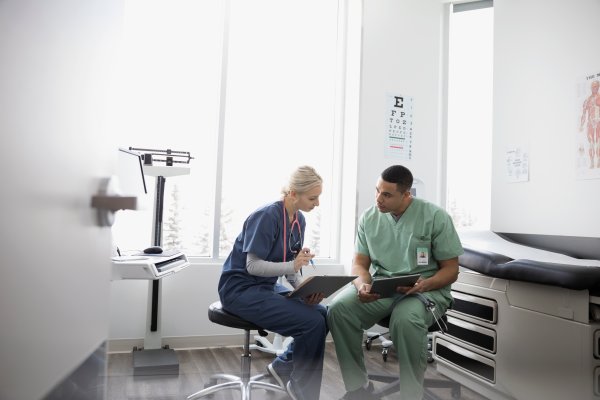 How a Job Acquires a Gender
Next Up: Editor's Pick